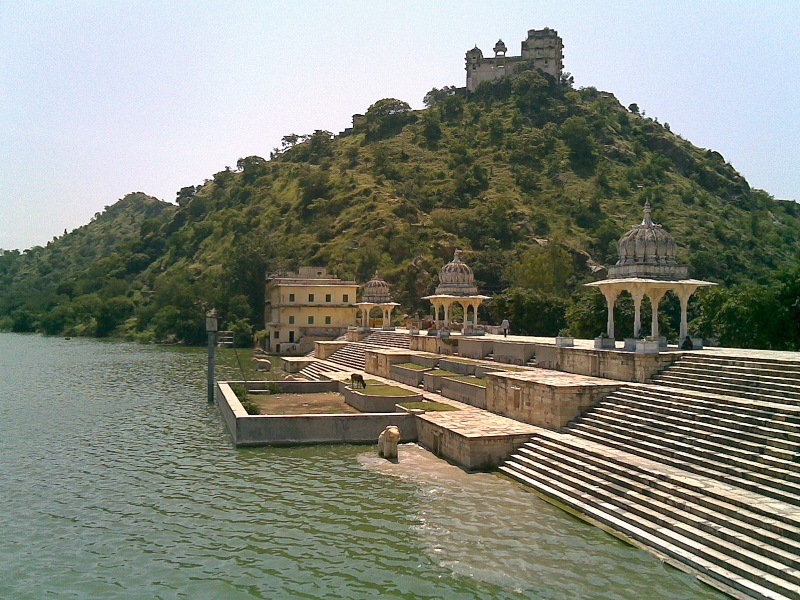 At a distance of 57 km from Udaipur, Jaisamand Lake, also known as Dhebar Lake, is a manmade lake situated in Udaipur district of Rajasthan. Dhebar Lake is India's second-largest artificial lake after Govind Ballabh Pant Sagar.

Maharana Jai Singh built Jaisamand Lake in 1685 AD while building a dam over Gomati River. The statistics of the lake is 14 km length, 9 km width and 102 feet depth. The lake has a circumference of 30 miles. The dam on this lake is worth mentioning due to its massive size of 1202 feet length, 116 feet height and 70 feet width houses a Shiva temple at its center. Jaisamand Lake was the largest artificial lake in Asia, till the time when Aswan Dam of Egypt was not constructed.

Jaisamand Lake comprises seven islands and one of the islands is still inhabited by the tribe of Bhil Minas. Out of all, the biggest island is known as 'Babaka Bhagra' and the second one is known as 'Piari'. The Jaisamand Island Resort is situated in one of the island. The lake has graceful marble steps descending to the water, where one can enjoy boat ride in the calm waters of Jaisamand Lake too.

The northern end of the lake has a palace with a courtyard while its southern end has a pavilion of 12 pillars. Rana Jai Singh's palaces, Hawa Mahal and Ruthi Rani Ka Mahal, are set in the foothills overlooking Jaisamand Lake. The summer palaces of the Queens of Udaipur surround Jaisamand Lake on all sides. On the embankment, there are six beautiful chhatris built at intervals and a temple of Narmadeshwar Mahadev. In front of these chhatris, stands a beautifully carved elephant on a pedestal, with its trunk upwards.

Surrounding Jaisamand Lake is the Jaisamand Wildlife Sanctuary. Built in the year 1957, the sanctuary covers an area of 62 sq. km. It was earlier used as a hunting reserve by the royalty. The sanctuary is the home to several migratory and rare birds as well as wildlife like panthers, deer, leopard, hyena, jungle cat, fox, wild boar etc. This sanctuary hails a large variety of resident and migratory birds and animals. Now, it has been converted into a game sanctuary.

Boat Ride Cost: Rs 30 for Indians and Rs. 80 for Foreigners