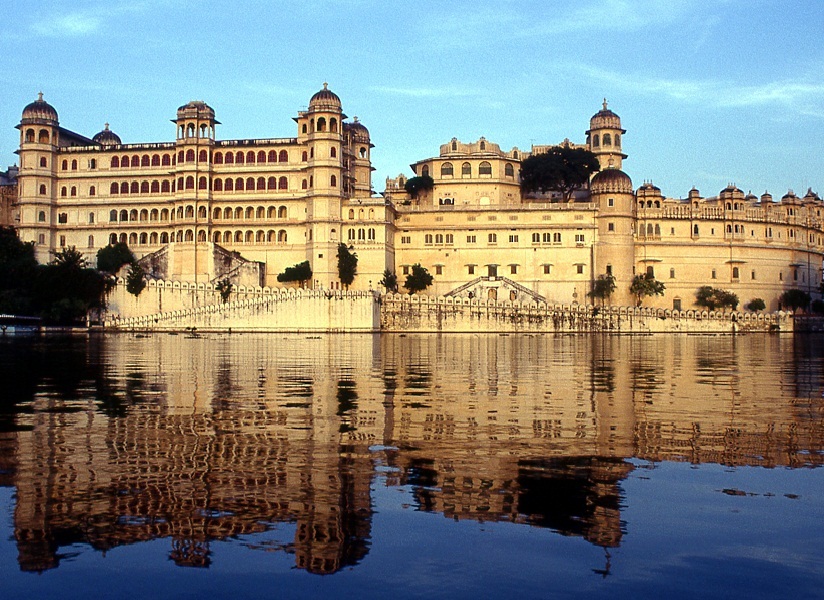 Place Location: On The Banks Of Lake Pichola

The City Palace was built initially by Maharana Udai Singh in 1559 AD when he shifted his capital from the erstwhile Chittorgarh to the newly found city of Udaipur. The Palace was built over nearly 400 years, with contributions from several rulers of the Mewar dynasty.

Among the top Udaipur tourist places, the City Palace boasts of a wonderful blend of Medieval European and Indian architectural styles. Set at an average elevation of 598 m, the Palace has several towers, domes, and arches, which add to the flavor of the heritage site. Courtyards, pavilions, terraces, corridors, rooms, and hanging gardens make up the entire palace. Encircled by fortifications, this imposing Palace is built using granite and marble.

The Palace has several gates that are known as Pols. Bara Pol (Great Gate) is the main gate to the City Palace complex. A triple-arched gate, which is known as Tripolia can be reached by passing Bara Pol. Eight marble arches or toranas, where kings used to weigh themselves with gold and silver, are located between these two gates. Elephant Gate or the Hathi Pol is located across Tripolia.

City Palace comprises 11 wonderful palaces, which were built by different rulers. In 1974, a part of the City Palace and Zenana Mahal has been transformed into a museum displaying ancient artifacts. The oldest part of the City Palace of Udaipur is Raj Aangan which Maharana Udai Singh built in the 16th century. The Palace Museum contains many antique articles, paintings, decorative furniture, and utensils and attracts thousands of visitors every day. Manak Mahal (Ruby Palace) has figures of crystal and porcelain. A collection of miniature paintings depicting the real-life stories of Radha-Krishna adorn the Bhim Vilas.

The Krishna Vilas is known for the noteworthy album of miniature paintings portraying royal processions, festivals, and games of the Maharanas. Moti Mahal (Pearl Palace) is celebrated for its lavish decor while Sheesh Mahal (Palace of mirrors) is known for its breathtaking mirror work. Chini Chitrashala is renowned for its Chinese and Dutch ornamental tiles. Dilkusha Mahal (Palace of Joy) is known for the murals and wall paintings. Bada Mahal is the exotic garden palace that stands erect on a 90 feet high natural rock formation. Rang Bhawan is the palace that used to contain royal treasure. There are temples of Lord Krishna, Meera Bai, and Shiva, located right to the Rang Bhawan. Mor Chowk has exceptional glass mosaics of peacocks, set in the walls presenting the three seasons of summer, winter, and monsoon. Laxmi Vilas Chowk is an art gallery with a distinctive collection of Mewar paintings.

Situated in the premises of the City Place complex, Jagdish Temple is the biggest and most beautiful temple of Udaipur. Amar Vilas is the highest point of City Palace and has wonderful hanging gardens with fountains, towers, and terraces. The balconies of the City Palace of Udaipur provide panoramic views of Jag Niwas, the famous Lake Palace Hotel, and Jag Mandir.