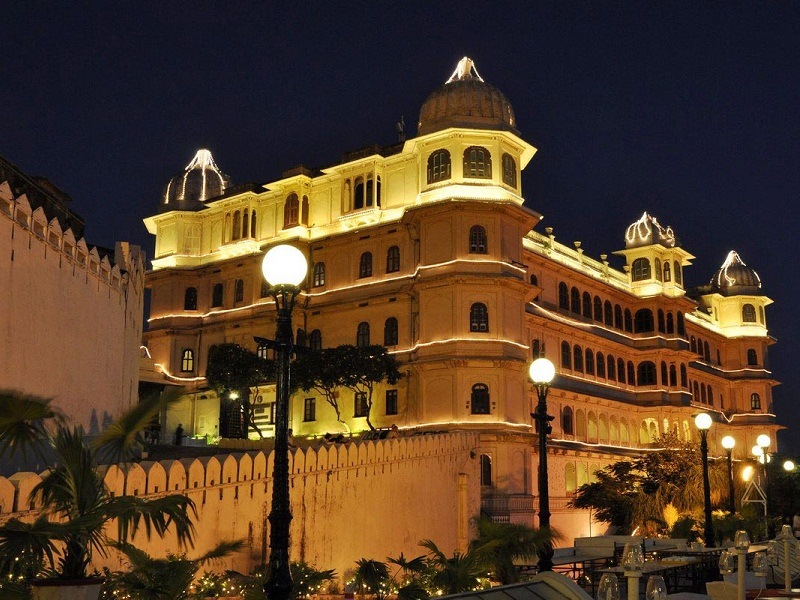 At a distance of 3 km from Udaipur City Railway Station, Fateh Prakash Palace is a heritage building situated inside City Palace complex on the banks of Lake Pichola in Udaipur. It is one of the popular places of Udaipur sightseeing and also one of the most famous wedding destinations in Udaipur.

The Fateh Prakash Palace was constructed on the orders of Maharana Fateh Singh. He is counted among the finest rulers of Mewar and he reigned from 1885 to 1935. The palace was originally built for conducting royal functions and has been accurately preserved. The palace maintains its historical value with several halls and beautiful corridors that add to the charm of the palace.

The Durbar Hall in the palace holds a lot of historical significance and is one of the main features of the palace. The foundation of this hall was laid by the Viceroy of India in 1909, Lord Minto. The hall was originally named after the viceroy as the Minto Hall. The portraits of the former rulers of Udaipur like Maharana Pratap and others are hung in the Darbar Hall.

There is a famous Crystal Gallery in Fateh Prakash Palace and is the largest private collection of crystals in the world. Crystal Gallery displays a collection of Oslers Crystals that were ordered by Maharana Sajjan Singh from England. But he died before it arrived and all crystals remain packed in the boxes for 110 years and was opened for public in 1994. The collections of the gallery include fountains, dresses, dining table, mirrored table tops, washing bowls, sofa sets with hand rest and frames, jewel encrusted carpet, a four-poster bed with rich hangings, throne like chairs and table fountains. From time-to-time, the gallery hosts royal weddings, festivals, parties and meetings. Tickets are available at the City Palace gates or the Crystal Gallery entrance.

Today the palace serves as heritage hotel but depicts the regal traditions and the lifestyle of the people of that era. The Hotel is classified as a Grand Heritage Palace and has won national tourism award for best hotel in its category. Owned and managed by hospitality masters- HRH Group of Hotels. Visitors can walk on along the terrace and also enjoy meals and beverages on the terrace restaurant and cafe.