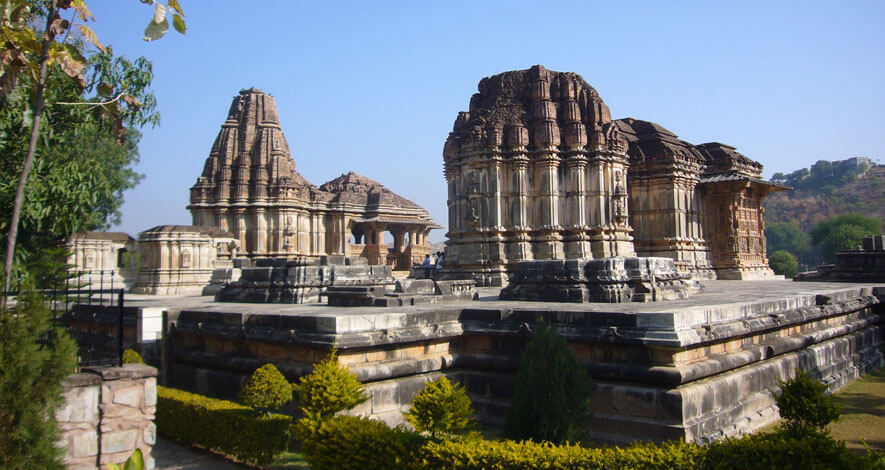 At a distance of 2.5 km from Eklingji Temple and 23 km from Udaipur, the Sas-Bahu Temple or Sahastra Bahu Temple is located at Nagda village on NH-8 in Udaipur district of Rajasthan.

Sas-Bahu Temple is a 10th century temple complex and is dedicated to Lord Vishnu. Great Kachhwa King Mahapala was built this temple. The term 'Sas-Bahu' suggests 'Mother-in-law and Daughter-in-law' respectively. However, it is probably just a local corruption of the original Sahastra-Bahu name, meaning 'one with thousand arms', a form of Vishnu.

The main entrance to the temples is made through a door that has carved lintels and a multi-lobed arch in its middle. Both the structures are laid out on a same plan having an altar, a mandapa (columned prayer hall) with projections and a porch. The temple of Sas is comparatively larger than that of the Bahu. The Sas temple is surrounded by ten subsidiary shrines and has a torana (archway) in the front and it is more profusely decorated than the smaller Bahu temple. The Bahu temple has an octagonal ceiling which is adorned with eight intricate female figures. It is believed that the image of the Lord Vishnu was swung from the torana along with hymns in the praise of lord on ceremonial occasions.

Facing towards the east direction, both the temples are constructed on a common platform. The temple is adorned with beautiful carvings that are based on Ramayana. It is also to be noted that the projection of the temple along with the exquisite sculptures makes this temple magnificent. The sculptures are made in two steps and in the first step the images of Lord Brahma, Vishnu and Shiva are carved and the second steps comes with the images of Rama, Parasurama and Balarama. A lotus is seen adorning the roof of the temple.

Another temple that captures visitors attention is Jain temple named Adbhuthji Temple, which is about 500 m from Sas Bahu Temple. Dedicated to the Jain Saint Shanti Nath, the temple is said to have been built during the rule of Rana Kumbha. The temple has a 9 feet tall strange idol and that how the temple got its name 'Adbhuth'. These temples were destroyed by the foreign invaders to a large extent, still they boast of their exceptional artistic architecture.