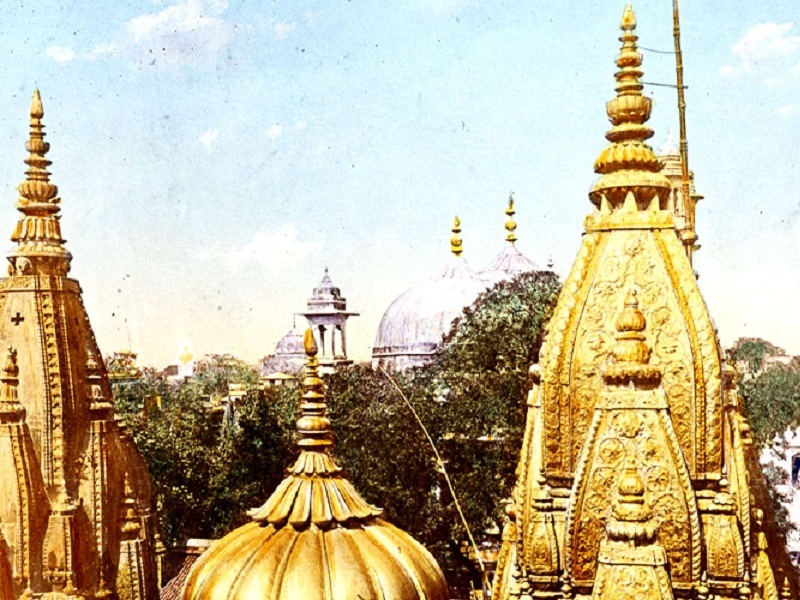 Travel Tips: Foreigners are not allowed into the temple & mosque.

At a distance of 5 km from Varanasi Junction, Kashi Vishwanath Temple is an ancient Hindu temple situated on the banks of River Ganga in Varanasi city of Uttar Pradesh. Popularly known as Golden Temple, it is one of the twelve jyotirlinga temples and also one of the popular places of Pilgrimage in India.

Kashi Vishwanath Temple is dedicated to Lord Vishwanath, one of the incarnations of Lord Shiva and he is regarded as the patron deity of Varanasi. The Vishwanath Jyotirlinga Temple at Varanasi has high religious significance and is the center of faith for millions of Hindus. The temple was visited by many great saints including Ramakrishna Paramhansa, Swami Vivekananda, Maharishi Dayanand Saraswati, Goswami Tulsidas, Adi Shankaracharya and Gurunanak Dev. Lord Vishwanath is considered to the supreme origin of the spiritual truth and strengthens the bonds of universal brotherhood. It is believed that a single darshan of Vishweshwara Jyotirlinga is considered to auspicious more than the darshan of other jyotirlingas in India.

According to the legend, the temple has been mentioned in the Puranas including the Kashi Khanda of Skanda Purana. The original Vishwanath Temple was destroyed by the army of Qutb-ud-din Aibak in 1194 CE, when he defeated the Raja of Kannauj. Sri Kashi Vishwanath temple has been rebuilt several times over the past few centuries. The present temple was built in 1780 CE by Rani Ahalyabai Holkar of Indore after Mughal emperor Aurangzeb destroyed the previous temple and built a mosque at the site (now adjacent to it), which is called as Gyanvapi Mosque. A Naubatkhana was built in front of the temple by Collector Mohammad Ibrahim Khan in 1785. The two beautiful domes of the temple were covered with gold donated by Punjab Kesari Maharaja Ranjeet Singh in 1839. The management of the temple was taken under UP Government in 1983.

The temple complex consists of a series of smaller shrines, located in a small lane called Vishwanatha Gali. The main Shiva Linga of the temple is 60 cm tall and 90 cm in circumference and is enshrined in a silver altar. There are small temples for Kaalbhairav, Dhandapani, Avimukteshwara, Vishnu, Vinayaka, Sanishwara, Virupaksha and Virupaksha Gauri. There is a small well in the temple called the Gyanvapi (the wisdom well) and it is said that the main priest of the temple had jumped in the well with the Shiva Linga in order to protect the lord from the invaders.

Mahashivratri and Dev Deepawali are the major festivals celebrated at Kashi Vishwanath Temple. Being the most famous temple of Varanasi, the temple witnesses around 3,000 devotees on daily basis and the footfall increases to 100,000 on special occasions.