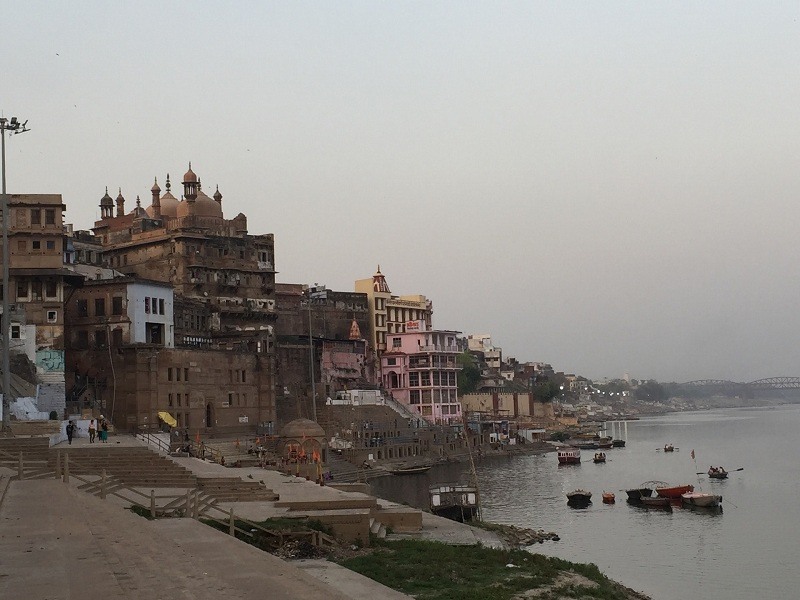 Travel Tips: Non-Muslims are not allowed into the mosque.

At a distance of 1.5 km from Manikarnika Ghat and 7 km from Varanasi Junction, Panchganga Ghat is another popular ghat along the banks of River Ganga in Varanasi, Uttar Pradesh. It is one of the cleanest ghats in Varanasi and among the popular Varanasi Tourist Places.

Panchganga Ghat is called so because it is built at the confluence of five holy rivers - Ganga, Saraswati, Dhupapapa, Yamuna and Kirana. Out of these five only Ganga remains visible while the other four are believed to have disappeared in earth. There are five black stone idols residing here for the five river goddesses. Many devotees throng to this ghat in hopes of attaining blessings from these five goddesses.

This ghat has lot of history. It is believed that Panchganga Ghat is also served as a teaching place for Vaidant Ramanand, the Guru of great saint Kabir. Further, it is also believed that the saint poet Tulsi Das composed the famous Vinay-Patrika here at this ghat.

This ghat is popular for Alamgir Mosque which is believed to have been constructed by Aurangzeb. Also known as Beni Madhav-ka-Darera, the mosque is believed to be constructed on the site of Bindu Madhava Temple erected by the Maratha chieftain Beni Madhav Rao Scindia in the 17th century AD. The temple was destroyed and the Mosque was constructed at that place during Mughal invasion in India. This imposing Hindu and Persian architectural structure, designed with carved pillars, turrets and marvelous domes, showcase the rich artworks of ancient India.