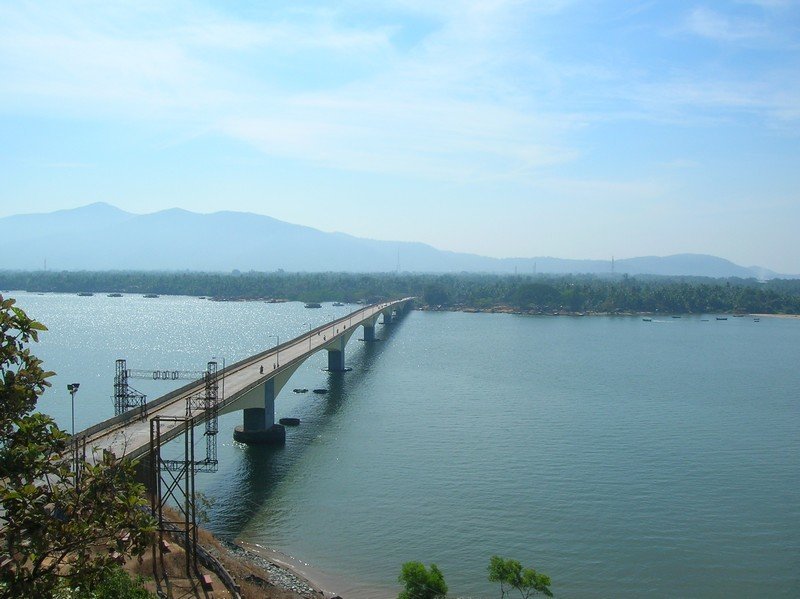 At a distance of 59 km from Gokarna, 70 km from Kumta, 108 km from Panjim, 114 km from Murudeshwar, 167 km from Hubli and 517 km from Bangalore, Karwar is a town and the administrative headquarters of Uttara Kannada district in Karnataka. It lies on the west coast of South India at the mouth of the Kali River near Goa - Karnataka Border. Karwar is one of the top beach destinations in Karnataka and also one of the must visit places as part of Goa trip.

Karwar derived its name from the nearby village of Kadwad. Kade means last and wado means area. Before Indian independence, the name Karwar was spelt Carwar. This is an ancient city majorly used for the sea trade, visited by the Arabs, Dutch, Portuguese, French and later the British. During the 18th century, this city was part of the Maratha Empire and became a British territory after the defeat of the Marathas in the third Anglo-Maratha War. Until 1950, it was a part of the Bombay Presidency.

Karwar's tranquil ambience had inspired the famous poet Rabindranath Tagore and he has dedicated a chapter of his biography to this town. It is regarded as one of the famous tourist places in Karnataka. The town has lovely beaches, beautiful temples and Forts attracting large number of tourists. Various attractions in Karwar are Karwar Beach, Devbagh Beach, Sadashivgad, Dargah of Peer Shan Shamsuddin Kharobat, Durga Temple, Kaju Bagh Beach, Kurumgad Island, Naganatha Temple, Narasimha Temple, Koodi Bagh Beach and Venkataramana Temple. Gokarna is about 60 km from Karwar and can be visited together.

Being a port town, Karwar is a center for agriculture, manufacturing and tourism. Once it is an important trade center especially for pepper. The town is famous for its fine muslin, a plain-woven cotton fabric; the production of which was started in 1638 by Sir William Counten. Also, most of the local artisans are skilled in sandalwood carvings of several items.

The Karavali Utsav is the biggest cultural event held at the Rabindranath Tagore beach in Karwar for four days. Many cultural events are held in which national and international artists present their shows. It is celebrated every year between December and January.

The best season to visit Karwar is from October to February. It usually takes about 2 full days to visit the important places in Karwar.

How to Reach Karwar - Full Details

Top 10 Places to Visit in Karwar

At a distance of 1 km from Karwar Bus Stand, Karwar Beach, also known as Rabindranath Tagore Beach, is the main beach in Karwar city.

This is the most popular beach in Karwar and also an important place to promote Karwar Tourism. The long stretch of golden sands of the beach is an ideal place to relax and spent time in solitude. It has also a recreational park, colorful music fountain, Toy train, Planetarium, and an aquarium to add to its attraction. The Warship Museum is a special attraction in the beach premises. River Kali joins Arabian Sea at the end of the beach. The sunset view from the Kali Bridge is an amazing and unforgettable experience.

Karwar beach is an ideal place for swimming because there are no sudden depths in the water. The soft sand here makes it ideal for sun bathing. It is quite pleasant to sit on the beach in the evening breeze and spend time while it becomes .....

At a distance of 8 km from Karwar Bus Stand and 5 km from Majali Beach village, Devbagh is a beautiful beach located nearer to Karnataka-Goa border on the northern side of Kali River. This is a private beach and is an ideal place for the beach lovers.

Devbagh Beach is one of the most beautiful and enthralling beaches in India and also one of the best places to visit in Karwar. This is a special island beach that faces the mighty Arabian Sea on one side and the dense Western Ghats on the other side. It is known for its endless stretch of golden sand, the clear blue waters of the Arabian Sea and the line of casuarina trees which dot the beach. This is the place where the renowned poet Sri Rabindranath Tagore had visited and lost in the scenic beauty of the nature way back in 1916.

At a distance of 13 km from Karwar Bus Stand, 2.5 km from Majali Bus Stop, Tilmati or the Black Sand Beach is located at Majali village in Karnataka. It is situated just beside Polem Beach of South Goa.

Tilmati Beach is one of the most beautiful beaches of Karnataka and one of the top places to visit in Karwar. At this little beach one can find coarse black sand of basaltic rock making the beach black in color. Tilmati literally translates to sesame sand or the sand that looks like sesame. This stretch of black sand, spread over 200 m, is said to be formed when the waves hit the basaltic rocks that are concentrated in this area. It is also believed that the Arabian Sea dumps the fine black sand brought by River Kali to this place. Majali Beach and Polem Beach that are adjacent to this beach have normal white sand.

Tilmati Beach in Karwar is an ideal place for picnicking. It is a tourist destination suitable for those who want .....

At a distance of 10 km from Karwar Bus Stand, Majali Beach is located at Majali Village, which is a small coastal town lies on the northern tip of coastal Karnataka and just a few kilometers South of Goa. This 4.5 km long beach is situated towards north of Devbagh beach. Indulging in activities at Majali Beach is one of the top things to do in Karwar.

Majali Beach is a renowned attraction in Karwar and is known for its sea facing cottages and resorts. Majali Beach Village offers six Row Cottages with all the modern amenities. Apart from this, the resort also boasts of wonderful Wood House and Tree House. The resorts located along the beach provide with facilities like private balcony, sit-outs, in-house laundry and many more. Majali Beach Village has a fine restaurant that offers delicious local and coastal cuisine.

Durga Temple, also known as Shanthadurga Temple, is dedicated to Goddess Durga. In the main sanctum sanctorum, the idol of goddess Durga sitting on the lion is very attractive. Believed to be constructed around 1665 CE, the temple is well-known for its architectural beauty and offers beautiful views of the islands and the surroundings areas. According to the history, Raja Shiv Chhatrapati found this temple and he gave the rights of worship in this temple to the local Bhandari family. On the way to Durga Temple, tourists can visit the remains of old fort of Sonda kings. There is also a 17th century blue towered mosque in front of this temple and is dedicated to Peer Shamsuddin Kharobat.

The locales pray to the goddess with great faith and also the .....

At a distance of 7 km from Karwar, Anjadiva Island or Anjadip Island is located in the Arabian Sea in South Goa. Due to the fact that the Island situates about 2 km from Binaga Village in Karnataka it is widely believed that Anjadiva belongs to this State but legally it is a part of Goa.

The Anjadip Island occupied an area of 1.5 sq km, it is the largest of the Karwar Panchadiva chain of five Islands and the other four are Kurnagal, Mudlingud, Devgad and Devragad. Anji stands for five in Tamil and it denotes the 5th Island. This idyllic Island is home to the Indian Navy.

The legendary sailor Vasco Da Gama and a Jewish trader Gaspar Da Gama requested the king of Portugal to create a naval fort at the region of Anjadiva to gain the administrative control of Goa. Anjadiva Fort is present on the Anjadip Island. Currently the fort lies in ruins and the Church of Our Lady of Springs which was constructed in the year 1505 is close .....

At a distance of 4.5 km from Karwar Bus Stand and 3 km from Devbagh Beach, Kodibag Beach or Koodi Bagh Beach is located at the confluence of the Kali River and the Arabian Sea in Karwar.

Koodi Bagh is among the most beautiful shorelines of Karwar and also one of the tourist places in Karwar. The meeting point of the Kali River and the Arabian Sea is a spectacular sight to watch. This beach is situated at the northern end of the Karwar Beach.

This beach offers an amazing view of sunset. It is good to have a relaxing time with some fun at this Beach. Long leisurely walks in the cool beach sands will be a soothing experience. This beach is very clean and is a perfect destination for adventure lovers. At this palm-fringed beach various activities such as canoeing, kayaking, paddling, banana boat riding and many more can be enjoyed.

At a distance of 80 km from Karwar, 30 km from Yellapur, Devkar Falls, also called as Vajramala Falls, is one of the beautiful waterfalls in Uttara Kannada district of Karnataka. This falls is visible from Devakar village and is one of the best places to visit in Karwar.

Devakar Waterfalls is situated in a small island called Devakar which is surrounded by the Kadra Dam backwaters. The height of waterfalls is about 300 feet and the water of the falls reach Kaiga reservoir. While falling, it glows like a Diamond (Vajra), so locally this falls is called as Vajramala falls. This falls is originated from Bare stream. Due to the lack of publicity this beautiful falls is still unknown to lot of people.

There is no well-developed road to reach the falls and during rainy season it becomes inaccessible. One has to cross the backwaters of Kadra reservoir to reach Devkar Village. There is a bus that runs from Kadra to Devkar Bus Stop, from .....

At a distance of 2 km from Chendia and 12 km from Karwar, Chendia falls, also known as Nagarmadi falls, is a small waterfall located in Uttara Kannada district of Karnataka.
Nagarmadi fall passes underneath a huge rock. This is a very unique waterfall falling from just 10ft height and it creates a big cave. There is a pool at the bottom of the falls where tourists can enjoy swimming.

The best time to reach this falls is from July to October.

At a distance of 1.1 km from Karwar Bus Stand, the INS Chapal warship museum is a naval museum situated at Rabindranath Tagore beach.

INS Chapal is a Russian made OSA missile boat. It was launched as a missile launcher warship by the Indian Navy. Its code name is K94. The 245-tonne ship has a length of 38.6 m, beam of 7.6 m and speed of 37 knots. This small ship was decommissioned in 2004 and turned into a museum. It is one of the 3 ship museums in India and probably the only one in Karnataka. It is one of the popular places of sightseeing in Karwar.


INS Chapal was a star of the 1971 Indo Pak War and missiles from the ship had bombarded Karachi causing large scale damage. It was one of the main reasons behind India's victor in the war. The crew of the ship were awarded prestigious gallantry award for their bravery and courage. It included 2 Param Veer Chakras and 8 Veer Chakras.

After its long tenure of dedicated service, it was decided to turn INS Chapal .....