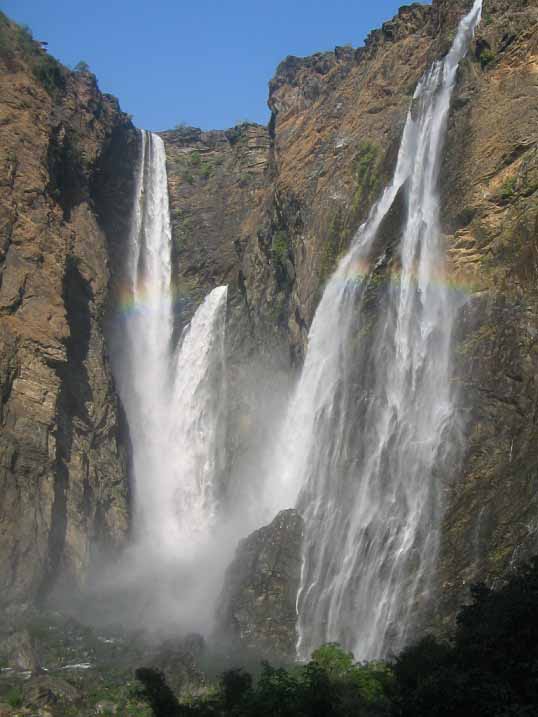 At a distance of 400 km from Bangalore, 105 km from Shimoga, 161 km from Hubli, 87 km from Murudeswar, 150 km from Karwar, 31 km from Sagar, 60 km from Sirsi & 21 km from Siddapur, Jog falls is situated in Shimoga district of Karnataka. Locally known as Geruoppe Falls, Gersoppa Falls and Jogada Gundi, it is one of the highest plunge waterfalls in India, and among the best places to visit in Karnataka.

This is formed over the Sharavathi River falling from a height of 253 m (830 feet). The Sharavathi River flowing over a very rocky bed about 250 yards wide, 253 m deep and the water comes down in four distinct falls known as Raja, Rani, Rover, and Rocket. The four cascades merge to form the huge waterfall. The Raja Fall pours in one unbroken column sheer to the depth of 830 ft. Halfway down it is encountered by the Rover, another fall, which rushes violently downwards to meet the Raja. The third fall, the Rocket, shoots downwards in a series of jets; while the fourth, the Rani, is a quiet fall over the mountainside. Jog Falls is one of the best waterfalls near Bangalore.

Jog Falls can be visited along with Gokarna Packages. There is a viewpoint near the parking area which also has few shops available. A narrow path from the viewpoint leads to the bottom of the falls. The walk is steep & a little difficult and takes about 45 minutes one way. The view is amazing from the bottom and the showering sizzles of the falls at the bottom are worth the effort (water bottles are sold midway of the trek path). However, the path is mostly inaccessible or dangerous during peak monsoons and it's suggested to go down only in the winter & summer seasons. Besides, Unchalli Falls, Bennehole Falls, Kudumari Falls, and Koosalli Falls are some of the best places to visit as part of Jog Falls holidy packages.

Hubli Airport is the nearest airport which is 171 km away from Jog Falls. The nearest railway station is Shimoga at a distance of around 105 km from Jog Falls. The Shimoga Railway Station is well connected to Mysore, Bangalore, Birur and Talguppa. Jog Falls is accessible by bus from Sagar and Siddapur. Sirsi is also a good base station to visit Jog Falls & other places around. There are also 3-4 day Dandeli Packages that can cover Dandeli, Jog Falls & Sirsi.

The best time to visit Jog Falls is from August to January while the peak season is from September to December.

Heggarne is the nearest village to Unchalli Falls, which is about 5 km away and the last 2 .....

At a distance of 30 km from Sirsi, 30 km from Unchalli Falls, and 77 Kms from Jog Waterfalls, Benne Hole Falls is a wonderful waterfall situated near Kasage village close to Sirsi - Kumta road. It is one of the beautiful waterfalls in Uttara Kannada district, and among the must-visit tourist places in Sirsi.

Benne Hole Fall is formed from the tributary of the Aghanashini River, which flows in the 'Devimane Ghat' region of the Western Ghats. It cascades down from the height of more than 200 feet into a pool around large and small rocks. The waterfall looks churning, creamy white butter hence the name Benne Hole where 'benne' means butter and 'hole' means big stream in Kannada. This location has another plus point for Bird-watchers as they can see birds such as plum headed parakeet, grey jungle fowl, common kestrel, woolly necked stork, jungle owlet, coppersmith barbet, orange minivet, black-headed oriole, and many more.

At a distance of 76 km from Gokarna, 113 km from Karwar, 162 km from Mangalore, 188 km from Shimoga, 214 km from Panjim, 219 km from Hubli, & 497 km from Bangalore, Murudeshwar is a well-known pilgrimage town located in the Uttara Kannada district of Karnataka. Situated between Honnavar and Bhatkal, it is one of the most must include places in Karnataka Tour Packages, and among the places to visit near Mangalore.

The Murudeshwar town was earlier known as 'Mrideshwara'. It was later renamed as Murudeshwar after the construction of the Murudeshwar temple, one of the famous places of pilgrimage in India, and among the must-include places in Murudeshwar tour packages. According to the legend, Ravana brought the Atma Lingam from Mount Kailash. Lord Ganesha using his trick fooled Ravana .....

Koosalli Waterfalls is a 6 step cascading waterfall dropping from a height of 380 feet. One has to trek for 5 Kms from Koosalli through dense forest which also includes difficult rock climbing in order to reach the falls (2 Hrs trek from Koosalli village one-way). This place is highly dangerous during monsoons when the rocks become slippery. Nov - Dec is the best time to trek this place. Koosalli can be reached from Shiroor by Auto (very few buses are available till Toodalli - 5 Kms from before Koosalli).

Kudumari Waterfalls is a magnificent waterfall dropping from a height of 300 feet through a single step. One has to trek for about 3 Kms from Chaktikal through dense forest. The trek route is considered to be very dangerous and not usually recommended for regular visitors (about 2 Hrs trek two-way). Nov - Dec is the best time to trek this place. Chaktikal can be reached from .....

This temple is dedicated to Goddess Parvathi. According to Legend, Goddess Parvathi killed a demon called Kamsasuran who lived here and attempted to become powerful through his penance. Devi along with the help of Veerabadra, .....

At a distance of 45 km from Sirsi, 102 km from Jog Waterfalls, 130 km from Gokarna, Shivaganga is a beautiful waterfall situated in the Uttara Kannada district of Karnataka. It is one of the most famous waterfalls in the Western Ghats, and among the best places to visit during your Sirsi Trip.

Shivaganga Waterfall is formed over the small Sonda River, also known as Shivaganga River. The small river falls from a height of about 74 m into a deep valley covered with dense flora and presents a charming view. One can also enjoy swimming at the falls. There is a small island near the falls locally called Ganesh pal. This name is derived from Lord Ganesh due to the presence of a small mural of Lord Ganesh inside a small temple present here.

From Sirsi, one can take a cab/bus to Kodnagadde, which is about 5 km from Shivaganga falls. Motorable road is available for further 4 km which .....

At a distance of 23 km from Sirsi, 50 km from Jog Falls, 139 km from Karwar and 111 km from Shimoga, Banavasi, also known as Konkanapura, is an ancient temple town in Uttar Kannada district of Karnataka.

Situated on the banks of Varadha River, Banavasi lies in the Malnad region of Western Ghats.
Banvasi is the oldest town in the Karnataka state. The name Banavasi comes from the words Bana and Vasi, which means forest and spring respectively.

Banavasi was once the capital of Kadamba rulers, an ancient royal dynasty of Karnataka. They established in 345 AD and ruled South India for at least two centuries. Before the Kadamba dynasty, Banavasi was under the reign of different dynasties, including Sathavahanas, Chutu and Pallavas. From mid-6th century to 8th century, the town was under the rule of Chalukyas. After Chalukyas, Rashtrakutas, Chalukyas of Kalyani, Yadavas, Hoysalas, Vijayanagara kings, Hyder Ali and Tipu Sultan .....