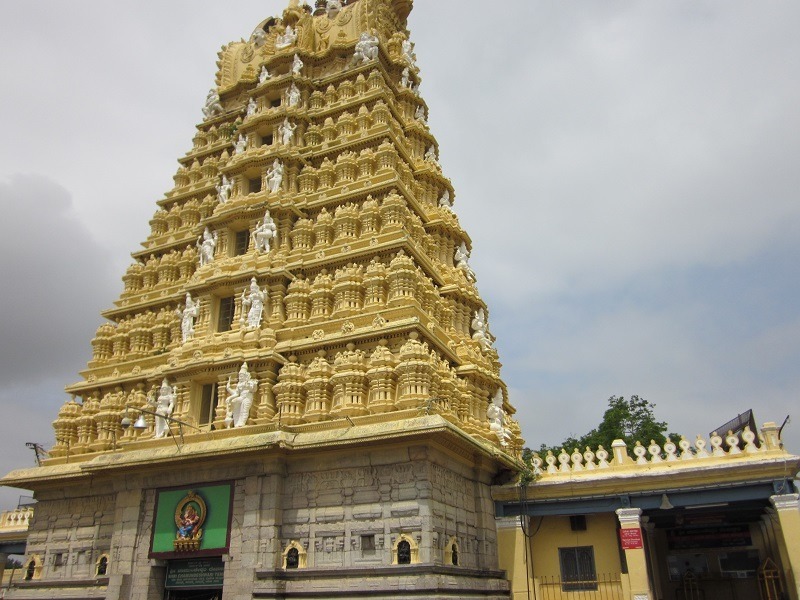 Travel Tips: Mahabaleshwara temple is behind the Chamundeswari temple and can be visited together.


At a distance of 8 km from Mysore Zoo & 13 km from Mysore Railway Station, Chamundi Hill Temple is a Hindu temple located in Mysore. It is one of the major places of pilgrimage in Karnataka, and among the must-visit places as part of Mysore tour packages.

The Chamundi Temple is dedicated to Goddess Chamundeswari, an incarnation of Goddess Parvathi who took this form to destroy Mahishasura. This is one of the top places to visit in Mysore. Also known as Krouncha Pitham, Chamundi Temple is one among the 18 Maha Shakti Peethas representing the hair of Sati Devi.

At an altitude of 1065 meters, the temple on Chamundi Hill was built in the 11th century. For centuries, the Wodeyars of Mysore revered the deity and made extensive contributions to this shrine. The idol of goddess Chamundi inside the central sanctum was made with pure gold. The temple is a fine example of Dravidian temple architecture. The temple possesses lots of images of Nandi. The most famous is the 15 feet high and 24 feet long Nandi on the 800th step on the hill.

The temple tower is 40 meters high with 7 stories and is painted in gold color. There are several images of the goddess in different forms carved on the outer walls of the temple. The doorway of the tower has a beautiful image of Ganesha. The main tower is followed by another tower that leads to the maha mandapa of the temple which has plain pillars followed by an antarala and the sanctum. Most of the time, the pilgrims have to get a glimpse of the goddess from maha mandapa. Those who are performing special poojas are allowed into the Antarala area close to the deity.

There is a colorful image of the Mahishasura situated on the summit of Chamundi Hill. A well-laid motorable road is available to the hilltop. There are also one thousand steps from the bottom for those who prefer to walk. It usually takes 30 minutes to 1 hour for Darshan and can go up to 2-3 hours on special occasions. Special darshans are available for Rs. 30 and Rs. 100 to complete the darshan quickly. Public transport is available from Mysore many parts of Mysore and taxis can also be hired. There is a viewpoint on the way to the hill which offers a panoramic view of the Mysore town.