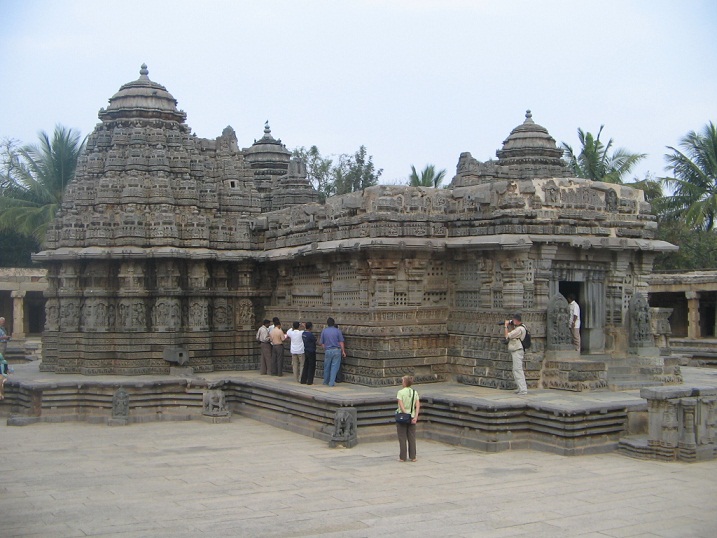 At a distance of 137 km from Bangalore, 35 km from Mysore & 50 km from Shivanasamudra Falls, Somnathpur is well known for the breathtaking Prasanna Chennakesava Temple, one of the three famous & finest representations of Hoysala architecture (other two being temples at Belur & Halebid). This is one of the three Hoysala temples nominated for UNESCO World Heritage Site status. This is one of the popular tourist places to visit near Bangalore & Mysore and one of the wonderful weekend getaways from both the cities. The Hoysala temples are known for minute & intricate carvings and sculptures with metal like polishing. It is one of the well known Karnataka tourist places and also one of the best places to experince Mysore Tourism.

Located on the banks of Cauvery River, Chennakesava Temple was built in 1268 by Somnatha, a general of King Narasimha III. The temple stands on a raised platform like other Hoysala temples. The temple comprises three shrines and three wonderfully carved peaks with a common Mandapa. The three sanctums once housed beautifully carved idols of Keshava, Janardhana and Venugopala. Today, the idol of Lord Kesava is missing but the other two are still worshipped by the visitors.

The Somnathpur temple is famous for its elaborate and intricate sculptures. The temple is enclosed in a walled courtyard with a mandapa running along the wall. The temple is built on an elevated star shaped platform. At the temple, the outer walls of the main temple are decorated with a series of star-shaped folds and the entire surface is covered with carved stone plaques. The walls above the plinth are also carved with exquisite figures of gods and goddesses taken from the Hindu puranas and arranged in vertical panels.

The most characteristic feature of this temple is its 16 different ceilings, each depicting a different stage of a blooming plantain (banana flower). Small and large pieces of finely carved stone chips are set in complicated patterns. One of the main highlights of this temple is the central wall space. There are images of deities decorated with heavy jewellery, bangles on every arm, towering crowns and chunky anklets. The vimana over the sanctums have greatly carved images of gods.

Bangalore Airport is the nearest airport which is about 174 km from Somnathpur. Mysore Junction is the nearest railway station, at a distance of 35 km from Somnathpur. It is well connected by train from Bangalore, Bagalkot, Tirupati, Tuticorin, Hubli, Chennai, Dharwar and Arsikere. Somnathpur has direct bus connectivity with Bannur (9 km), which can be reached by bus from Mysore (27 km) and Mandya (27 km).

The best time to visit Somnathpur is from October to March while the peak Season is from April to May & September to January. Usually it takes 2-3 hrs to visit this temple.

How to Reach Somnathpur

How to Reach Somnathpur - Full Details

Top 10 Places to Visit in Somnathpur

#1 of 2 Places to Visit in Somnathpur

At a distance of 24 km from Somnathpur, 32 km from Sivanasamudram & 49 km from Mysore, Talakadu is a historical place situated on the banks of Kaveri River n Karnataka. It is one of the popular places to visit in Somnathpur.

Talakadu is a beautiful place surrounded by temples and is among prime place to visit on a Mysore trip. Talakadu had over 30 temples, most are them are buried in the sand today. Some of these temples have been excavated and are open to the public. There are five temples dedicated to Lord Siva - Pathaleshwara, Maruleshwara, Arkeshwara, Vaideeshwara, and Mallikarjuneshwara Temple. The Keerthinarayana temple dedicated to Lord Vishnu is a beautiful site with wonderful carvings.

Talakadu was ruled by several dynasties - Gangas, Hoysalas, Rashtrakutas and Vijayanagara Kings. The .....

#2 of 2 Places to Visit in Somnathpur

At a distance of 130 km from Bangalore & 81 km from Mysore, Shivanasamudra is a famous waterfall situated in the Mandya district of Karnataka State. This is one of the best waterfalls in Karnataka, and among the popular places to visit near Bangalore.