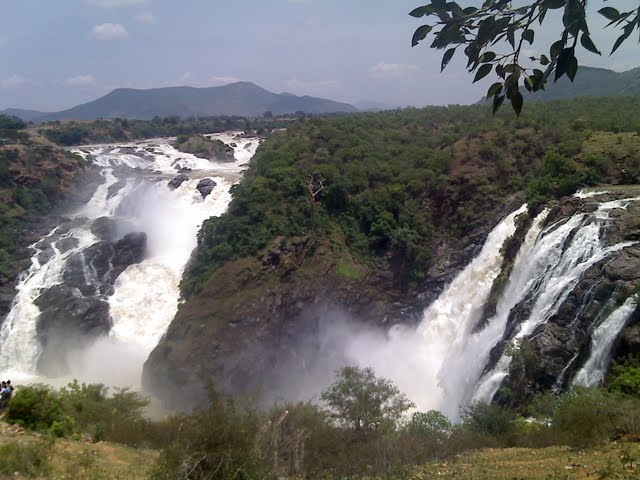 At a distance of 130 km from Bangalore & 81 km from Mysore, Shivanasamudra is a famous waterfall situated in the Mandya district of Karnataka State. This is one of the best waterfalls in Karnataka, and among the popular places to visit near Bangalore.

Gaganachukki includes a huge horsetail-shaped waterfall dropping from a height of 90 m and two large parallel streams that cascade down through a rocky bed from a height of over 320 feet. The currents here are quite strong and the gorge is quite deep. So, swimming is not permitted here. Asia's first hydroelectric power station was set up downstream of the falls in the year 1905. The power generated here was initially used in Kolar Gold Fields. The power station is situated near a Dargah, from where you can have excellent views of the other side of Gaganachukki.

Bharachukki is situated at a distance of approximately one km from the Gaganachukki (Dargah point). The cascading edge of Bharachukki is a little wider and more popular than that of Gaganachukki. Barachukki is a cascading fall with a height of 70 m forming several streams through the wide rocky formations establishing superb natural beauty. There is a well-laid plight of about 200 steps that lead down to the waterfall. The way down to the waterfall is relatively safe as it is fenced with railings and there are benches to sit on and relax. An interesting way to watch the beauty of the waterfall is to take a coracle ride to the mouth of the magnificent waterfall. Barachukki also has a section of the waterfall where the water flows less in volume and an ideal spot to play and enjoy a bath under the waterfall in this area.

Though geographically both the falls are adjacent, the viewpoints of these falls are about 15 km away. The Gaganachukki waterfalls are best viewed from the Shivanasamudra watch tower. There is another approach to the Gaganachukki falls from the Dargah Hazrath Mardane Gaib which provides the best view of the right branch of the falls. Reaching the bottom of the waterfall from the watchtower side is not possible as the area is fenced and no one is allowed to go near the water. There are also warnings posted near the fence that caution visitors against crossing the barrier and proceeding to the water from that side of the falls.

July to January is the best time to visit Sivanasamudra Falls while August to October is the peak season.

How to Reach Shivanasamudra Falls

#1 of 2 Places to Visit in Shivanasamudra Falls

At a distance of 137 km from Bangalore, 35 km from Mysore & 50 km from Shivanasamudra Falls, Somnathpur is well known for the breathtaking Prasanna Chennakesava Temple, one of the three famous & finest representations of Hoysala architecture (other two being temples at Belur & Halebid). This is one of the three Hoysala temples nominated for UNESCO World Heritage Site status. This is one of the popular tourist places to visit near Bangalore & Mysore and one of the wonderful weekend getaways from both the cities. The Hoysala temples are known for minute & intricate carvings and sculptures with metal like polishing. It is one of the well known Karnataka tourist places and also one of the best places to experince Mysore Tourism.

Located on the banks of Cauvery River, Chennakesava Temple .....

#2 of 2 Places to Visit in Shivanasamudra Falls