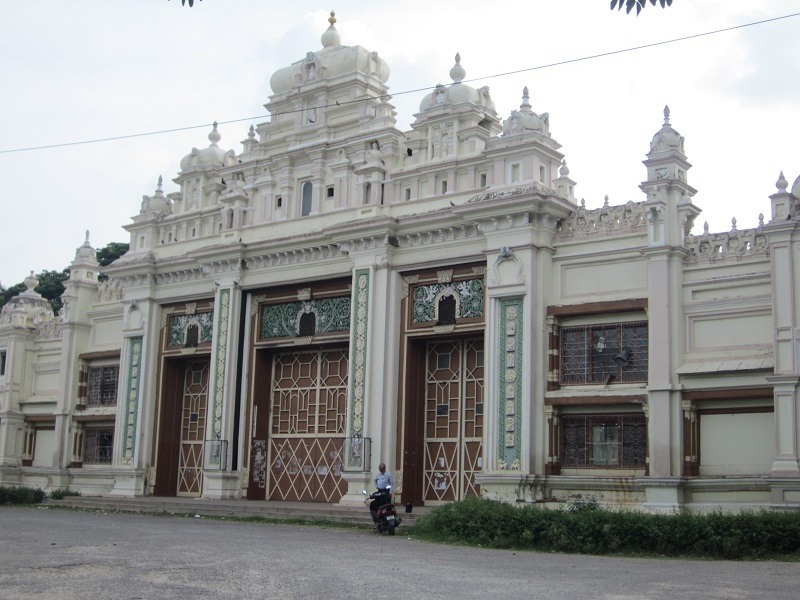 Travel Tips: Photography is not allowed inside.

At a distance of 2 km from Mysore Railway Station & 2 km from KSRTC Bus Station, the Jagan Mohan Palace which houses the Jayachamarajendra Art Gallery is located near the City Bus Stand in Mysore. It is one of the best-preserved art galleries in Karnataka, and among the most popular Mysore tourist places.

The Palace is a three-storied structure constructed in the traditional Hindu style of architecture. The original palace was extended in 1900 and an external facade with a hall was added to the existing structure of the palace. This new facade has three entrances. The walls of the interiors are painted with murals. These mural paintings which follow the traditional style of the Mysore school of painting depict the Dussehra scene and the canvas depicting the sequence of the Jumbo Savari stretches across three walls. A family tree of the Wodeyars tracing the lineage of the royal family is also painted on a wall. Two wooden displaying Dashavatara, the ten incarnations of the Lord Vishnu are also present in the palace. Until the completion of the main palace auditorium in 1912, the annual day and Dussehra festival celebrations were taken place here.

The palace was converted into an art gallery in 1915 and was renamed as Jagan Mohan Palace Art Gallery in 1955 after Sri Jayachamarajendra Wodeyar. It is considered one of the best art galleries in South India and also one of the top tourist places to visit in Mysore. The art gallery contains paintings exceeding 2000 in number and these belong to different Indian styles of painting like Mysore, Mughal, and Shantiniketan. It houses the prestigious collection of paintings of Raja Ravi Varma.

Another important painting present here is the Lady with the lamp which was painted by the artist Haldenkar and is placed in a dark room where it is the only exhibit. Exhibits here also include weapons of war, musical instruments, sculptures, brass-ware, antique coins, and currencies. Some other unique artifacts exhibited here is a French clock which has a mechanism in which a parade by miniature soldiers is displayed every hour; beating drums mark the seconds and a bugle marks the minute. Paintings made on a grain of rice that can be viewed only through a magnifier are also displayed here.

Jagan Mohan palace has an auditorium that is occasionally used for cultural events like dance and music performances and especially during the Dussehra festival. This place is very close to the Mysore Palace and usually visited together.