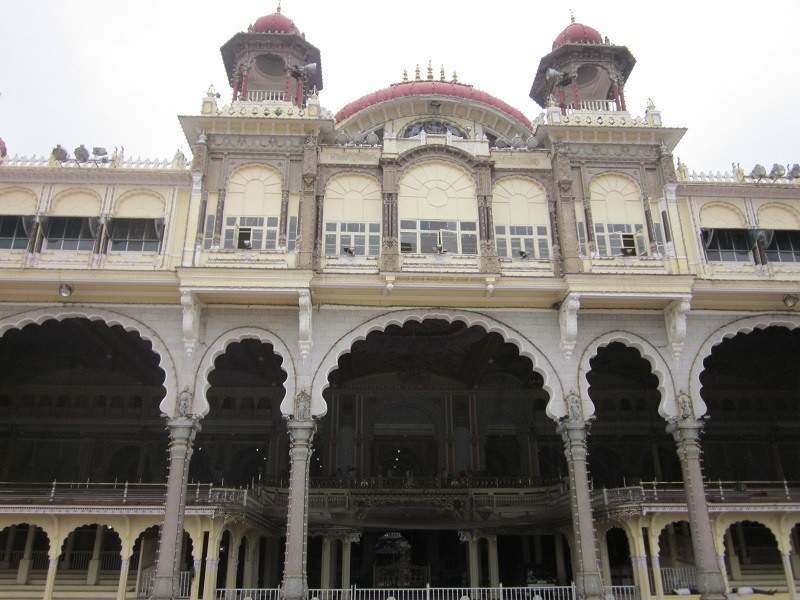 At a distance of 2.5 km from the Mysore Railway Station & 2 km from KSRTC Bus Station, the Mysore Palace was the official residence of the former royal family of Mysore, and also housed the durbar. It is one of the largest palaces in India, and among the best tourist places to visit in Mysore.

Mysore Palace is the venue for the famous Mysore Dasara and it is often used to promote Mysore Tourism. It is one of the top attractions you must include in Mysore Packages. Designed by British architect Henry Irwin and built-in 1912 after a fire burnt down the old wooden palace, the architectural style of the palace is commonly described as Indo-Saracenic and blends Hindu, Muslim, Rajput, and Gothic styles of architecture. It is a three-storied stone structure, with marble domes and a 145 ft five-storied tower. The palace is surrounded by a large garden. The facade has seven expansive arches and two smaller ones flanking the central arch, which is supported by tall pillars. Above the central arch is an impressive sculpture of Goddess Gajalakshmi with her elephants.

Also known as the Amba Vilas Palace, it is a treasure house of exquisite carvings and works of art from all over the world. The palace has three entrances, the East Gate, the South Entrance, and the West Entrance. The entrance to the Mysore Palace is through the Gombe Thotti or the Doll's Pavillion that has a vast collection of dolls that belong to the early 19th and 20th centuries. This section also includes the wooden elephant Howdah which is adorned with 81 kg of gold. The seven canons that are situated in front of Gombe Thotti are used even today to mark the beginning and the end of the Dasara festival.

The Kalyana Mantapa or Marriage Hall with its chandeliers and stained Belgian glass ceiling arranged in peacock designs is another main attraction. The magnificent jewel-studded golden throne, made of 200 kgs of pure gold, is displayed during the Dussehra festival. The beautiful paintings on the ceiling of the durbar hall are breathtaking and provide a unique feature to the palace.

The Amba Vilas is the hall used by the king for the private audience and is one of the most spectacular rooms. This room is one of the most ornate rooms in the Palace and is located on the first floor. The Diwan-e-Aam is on the same floor facing south. King would host major ceremonial gatherings in this hall. The Palace has several visually delightful rooms like the portrait gallery, the royal armory, collections of costumes and jewellery, delicately carved doors of mahogany and solid silver, graceful chandeliers, decorative stained glass ceilings, and ornamental frescoes.

The Mysore Palace complex also consists of twelve temples in varied architectural styles which were built between the 14th - 20th centuries. At the time of the Dussehra festival, the palace is illuminated with more than 96,000 lights. Photography is not allowed inside the palace.

Illumination Timings: 7 PM - 8 PM on Sundays, national holidays, and during the Dussehra festival.