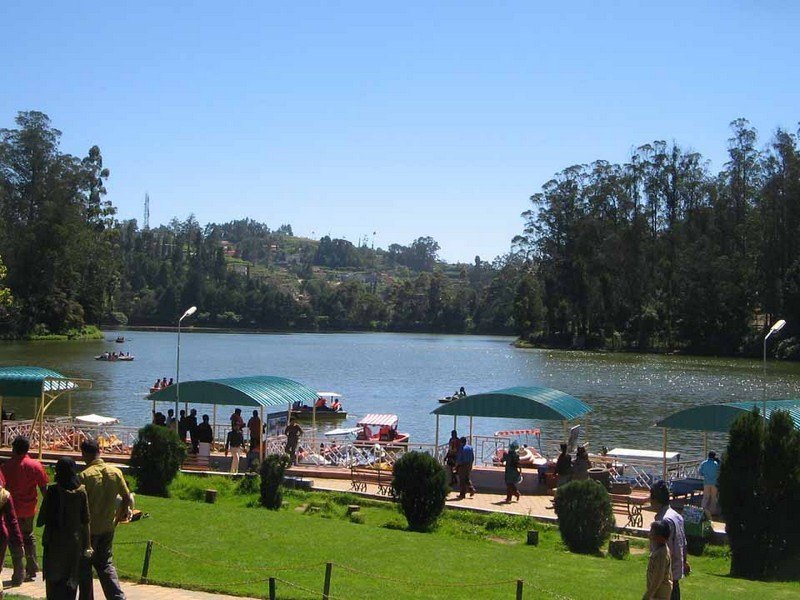 Best Time to Visit Ooty: October to May

At a distance of 89 km from Coimbatore, 128 km from Mysore, 265 km from Bangalore,158 km from Kozhikode, 244 km from Munnar, 254 km from Kodaikanal, 18 km from Coonoor & 556 km from Chennai, Ooty is one of the best hill stations in India and also one of the top places to experince Tamilnadu Tourism. Ooty can also be visited along with Wayanad as part of Ooty - Wayanad tour packages.

At an altitude of 7,440 feet, Ooty, also known as Udhagamandalam, is often referred to as 'Queen of hill stations'. It is the capital of Nilgiris district in the state of Tamilnadu. Nilgiris means 'Blue Mountains'. Ooty Lake, Botanical Garden and Rose Garden are among the must include places in your Ooty tour packages. A land of picturesque picnic spots & lakes, it was a popular summer and weekend getaway for the British during colonial days.

Ooty was originally a tribal land occupied by the Todas along with other tribes. The Nilgiri territory came into possession of East India Company as part of the ceded lands, held by Tipu Sultan in 1799. In 1818, Wish and Kindersley, Assistant and Second Assistant to Collector of Coimbatore visited this spot and submitted their experience report to the Collector of Coimbatore John Sullivan. John Sullivan later began the construction of his bungalow at Dimbhatti the first European dwelling on the hills. Ooty served as the summer capital of the Madras Presidency and other small kingdoms, much visited by British during the colonial days. Its stunning beauty and splendid green deep valleys inspired the British to name it Queen of Hill Stations. Sullivan later developed the town and encouraged the establishment of tea, chinchona, and teak trees.

Apart from pleasant weather, Ooty Lake, Botanical Garden, Rose Garden, Wenlock Downs, Pine Forest, and Emerald Lake are the popular Ooty sightseeing places. The toy train, known as Nilgiri Mountain Railway that runs from Mettupalayam to Ooty is a UNESCO World Heritage Site and a must be experienced. The train route wends its way through many hair-raising curves and fearful tunnels and chugs along beside deep ravines full of verdant vegetation, gurgling streams and tea gardens. The train route was developed by the British engineers in 1908, covering 42 kilometers length with 108 curves, 16 tunnels and 250 bridges.

The establishment of numerous tea estates made Ooty famous. Lofty mountains, dense forest, sprawling grasslands and miles and miles of tea gardens greet the visitors on most routes. The annual Tea and Tourism Festival (Jan) and Summer Festival (May) attract crowds in huge numbers.

From Ooty, the train to Mettupalayam start at 2 PM. Journey time is 3 hours 35 minutes.

How to Reach Ooty - Full Details

Top 10 Places to Visit in Ooty

At a distance of 1 km from Ooty Bus Station & Railway Station, Ooty Lake is an artificial lake situated in the beautiful hill station of Ooty. It is one of the most visited tourist places in Ooty and also one of the popular places to represent Ooty Tourism. It is also one of the top attractions you must include in Ooty packages.

Ooty Lake was built by John Sullivan in 1824 AD, the then Collector of Coimbatore. Covers an area of 65 acres with an average depth of 40 feet, the lake is fed by the mountain streams in the Ooty valley. The lake was originally intended to be used for fishing with ferries being used to travel across the lake. It gradually shrunk from its original size giving place to the current bus stand race course, and the lake park.

The lake is surrounded by groves of Eucalyptus trees with a railway line running along one shore. Situated amidst beautiful valleys, Ooty .....

At a distance of 3 km from Ooty Bus Station & Railway Station and 4 km from Ooty Lake, Ooty Botanical Gardens is a beautiful garden situated on the foothills of Dodabetta Peak in Ooty. Maintained by Tamil Nadu Horticulture Department, Ooty Botanical Gardens is one of the top places to visit in Ooty and also one of the best botanical gardens in India.

The Botanical Gardens in Udhagamandalam was laid out in 1847 AD. It was designed by the architect William Graham McIvor under the supervision of George Hay, 8th Marquess of Tweeddale, the then Governor of Madras. The original purpose of the Botanical Gardens was to promote and study the various flora in and around Nilgiris. Now, it is open to the public as a park that can be enjoyed by visitors.

The garden spreads over an area of 22 hectares with more than 650 species of flowers and trees. The .....

At a distance of 9 km from Ooty, Doddabetta is a mountain peak situated on the Ooty - Kotagiri Road in the Nilgiris district of Tamilnadu. Literally means Big Mountain, Doddabetta is the highest point in Nilgiri Mountains and also one of the popular places to visit in Ooty. It is among prime place to visit on a Ooty trip.

Situated at an altitude of 2623 m, Doddabetta is regarded as one of the highest peaks in South India, which lies at the junction of the Western and Eastern Ghats. The area surrounding Doddabetta is mostly forested. Sholas cover the hollows of its slopes. Tall rhododendron trees, flowering sub-alpine shrubs and herbs are common, even very near the peak. One can have a magnificent panoramic view of the landscape, beautiful valley, plains of Coimbatore and the flat highlands of Mysore from the peak.

At a distance of 2 km from Pykara Lake and 23 km from Ooty Bus Stand, Pykara Falls is a majestic waterfalls situated on Ooty - Mysore road in Ooty, Tamil Nadu. This is one of the best waterfalls near Bangalore and also one of the most popular Ooty tourist places. It is another popular attraction not to miss in a Ooty tour package.

Pykara Falls is formed by Pykara River on the downstream of the Pykara Dam. The falls drops down into two sections with height of 55 m and 61 m through multiple layers on the rocky bed providing a unique beauty to the stream. The waterfall amidst the dense forest is a treat to watch. It is one of the must visit places for honeymoon couples and nature lovers during their Ooty trip. During rainy season, the waterfall is in .....

At a distance of 12 km from Bandipur National Park, 37 km from Ooty, and 92 km from Mysore, Mudumalai Wildlife Sanctuary or Mudumalai National Park is located at the foothills of the Nilgiri hills in the state of Tamil Nadu. It is one of the finest and most attractive place to include in Ooty tour packages and also one of the top places to visit in Ooty.

Mudumalai is the first sanctuary in South India set up in 1940 and was declared as a National Park in 1990. In April 2007, the Tamil Nadu state government declared Mudumalai to be a tiger reserve. The sanctuary is situated on Karnataka-Kerala border adjacent to Bandipur National Park of Karnataka and Wayanad (Muthanga) Wildlife Sanctuary of Kerala. At an .....

At a distance of 16 km from Ooty, Wenlock Downs is a vast expanse of grassy meadow located on the way to Pykara in Ooty, Tamilnadu. It is one of the most scenic places in Ooty and also one of the best Ooty tourist places. Along with Ooty Lake, this place is most commonly represented for Ooty Tourism.

Wenlock Downs is a spectacular meadow named after Sir Arthur Lawley's sibling Beilby Lawley, third Baron Wenlock. The downs spread majestically across 20,000 acres of rolling lands that seems to be stretching endlessly. The entire place is covered with Shola forest. More popularly known as the Shooting Point, Wenlock Downs has two popular movie filming points known as Sixth Mile and Ninth Mile named so because of they are located at 6 miles and 9 miles away from Ooty.

The extensive grassland of .....

At a distance of 9 km from Ooty Bus Station, Kamraj Sagar Dam, also known as the Sandynalla Reservoir, is a very quiet and scenic dam situated on the slopes of the Wenlock Downs in Ooty. It is one of the top Ooty tourist places and also a must include in every Ooty Tour Package.

The dam, built on the Kamrajar Lake, is spread over 400 acres and is situated on the way to Wenlock Downs & Pykara. The dam is a monsoon fed water body and measures about 6 km in length. The dam and the serene location make it a heavenly place and a favorite haunt for the nature lovers. It is also a popular destination with honeymoon couples because of its picturesque natural beauty. It is a popular shooting location in Ooty.

There are several walking trails around the lake and visitors can also explore several tourist places .....

At a distance of 22 km from Ooty, Pykara Lake is a placid lake situated on Ooty - Mysore road in Tamilnadu. Pykara Lake & Dam is one of the best places to visit in Ooty and an ideal place to experience beautiful boat ride.

Pykara Dam built on Pykara River amidst dense forest is a beautiful destination offering breathtaking scenery. Pykara is the largest river in Nilgiris district. Pykara Lake is a blessed lake for the Todas, the local tribe of Nilgiris. This is the best place to relax and admire the beauty of nature. The dam is near the main Ooty - Gudalur road and includes a power station. Often referred as one of the oldest power plants in South India, the Pykara Power Station still functions and generating about 60 megawatts electricity. It was declared as a heritage plant in 1997, triggered the establishment of more hydro-electric power stations in the state. .....

At a distance of 17 km from Ooty and 27 km from Coonoor, Emerald Lake, a serene lake with emerald blue waters, is located near Emerald village in the Nilgiris district of Tamil Nadu. Situated amidst dense forests, it is one of the top Ooty tourist places. The lake is part of the Silent Valley National Park situated on the way to Avalanche village.

The blue waters of Emerald Lake surrounded by lush green meadows and forest is simply mesmerizing. The water is crystal clear and of course cold. This is a great place to enjoy the day with breathtaking views of the slopes of Nilgiris. Emerald Lake is also a haven for a variety of birds. It is a mini paradise for bird lovers and ornithologists as they get to see and study a number of native birds. It is also notable for the scenic sun rise and sun set views near the lake. The Tea gardens is a great spot to spend some time as it gives a memorable experience. Trekking .....

The Rose Garden was established in 1995 to commemorate the centenary of Ooty flower show. It is situated at an altitude of 2200 m on the slopes of the Elk Hill in Vijayanagaram area of Ooty town. This garden consists of five terraces in an area of 10 acres and has more than 2800 variety of roses. This garden has been beautifully laid out in terraces with rose tunnels, pergolas and bowers with rose creepers. This garden is maintained by the Tamil Nadu Horticulture Department. .....