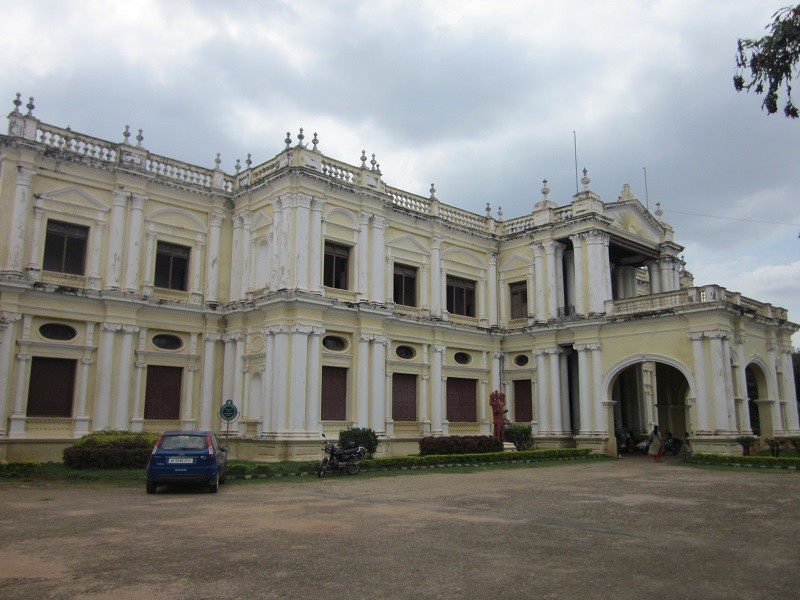 At a distance of 5 Kms from Mysore Railway Station & 5 Kms from KSRTC Bus Station, Jayalakshmi Vilas Mansion is situated on a high ridge in the campus of the University of Mysore. It was built in 1905 by Maharaja Chamaraja Wodeyar for his eldest daughter Jayalakshmi Devi.

Made up of 3 different buildings, the palace was originally set in vast estate of 800 acres. The mansion was initially called the First Rajkumari Mansion or Palace of the first princess or the Kebbekatte Bungalow. It houses a dancing hall and Kalyana Mantapa. Renovated in 2002, it is now a part of the Mysore University and has been converted to a museum. The palace has 125 rooms.

Jayalakshmi Vilas Mansion has an imposing structure and an equally impressive architecture with large & intricately carved pillars. The interior decorations of this magnificent building are in a purely Indian style. The highlight of the palace is the kalyana mandapa which is a square shaped hall with large teak pillars adorned with 40 feet high glass dome.

The palace currently houses three museums - Archeology Museum, Folklore Museum and General Museum, among which, The Folklore Museum is very unique and has rare collection.

Founded in 1968, this museum has 6500 folk art and folklore articles on display and the museum is celebrated as one of the largest of its kind in Asia. An amazing collection of carved wooden & leather figures from Karnataka villages, rural costumes, utensils, ornaments, metal ware, implements and tools used in various rural professions are displayed here. Models of temples and houses, decorative masks, ceremonial headwear, and leather shadow puppets are other highlights of this museum.

The Archeology Museum exhibits several stone sculptures on the ground level and beautiful paintings of eminent personalities, nature, historical events from Mysore and other parts of Karnataka among others. These artifacts were collected by the Royal family through decades. There are few 3D images which appear differently when the light is on & off. On ground level, there is a life size tiger with real tiger skin on which an ivory arch is attached with the picture of last Mysore ruler.