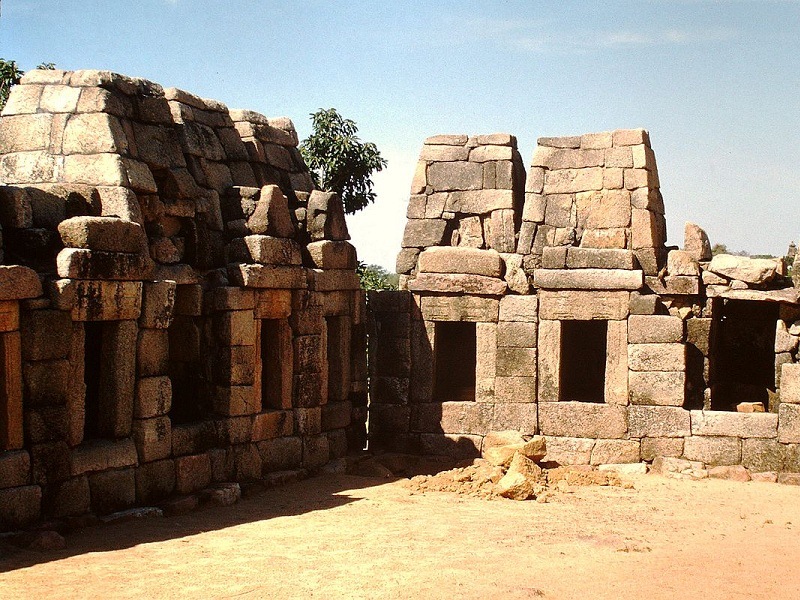 At a distance of 1 km from Kandariya Mahadev Temple and 1.5 km from Khajuraho Bus Stand, Chausath Yogini Temple is another ruined Hindu temple belonging to the Western Group of Temples in Khajuraho. The temple has been classified as a Monument of National Importance by the Archaeological Survey of India.

Chausath Yogini Temple is believed to be the oldest surviving temples in Khajuraho, the erstwhile town of Chandelas, dating back to 900 AD. The name of the temple is derived from the Hindi word 'Chausath', which means 64. Legends state that the temple once had 64 yoginis in its 64 cells, who attended goddess Kali. Further, it is also believed that goddess Kali sheltered herself in the 65th cell. Only 35 shrines are survived now out of original 65 shrines.

The Chausath-Yogini Temple is the earliest building at Khajuraho and is situated on a low granite outcrop to the south-west of the Siva Sagar tank. Made using coarse granite, it boasts of an open-air quadrangular design that adds to its uniqueness. Chausath Yogini Temple is constructed on a huge raised platform that is located in an open place surrounded by 64 small temples. The shrines are tiny plain cells, each entered by a small doorway and roofed by a curvilinear sikhara of an elementary form. The shrine in the back wall, facing the entrance, is the largest and perhaps constituted the main shrine.

The temple ruins have no sculpture. Three large statues of goddesses, found among the ruins, are now located at the Khajuraho museum. The goddesses have been identified as Brahmani, Maheshwari, and Hingalaja or Mahishamardini. These statues are among the oldest sculptures of Khajuraho.