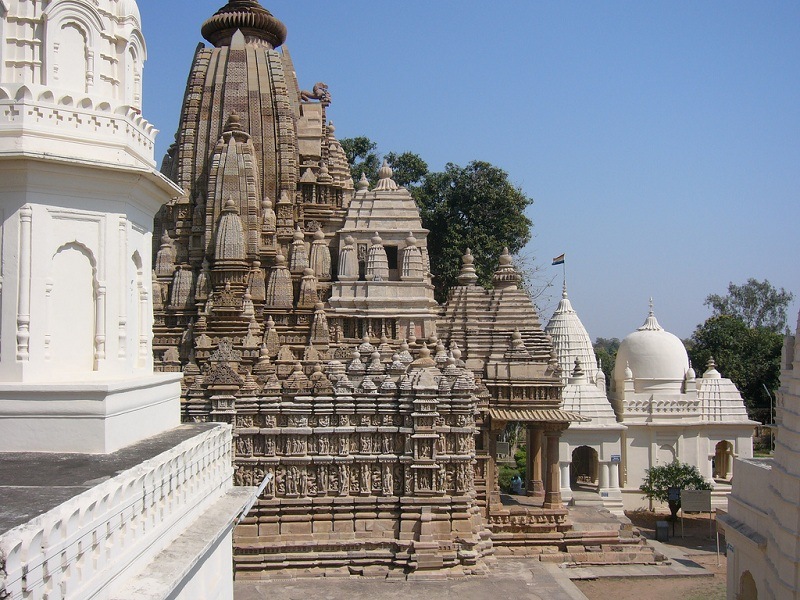 At a distance of 1.5 km from Khajuraho Bus Stand, the Jain Group of Temples is located on the south east of the Khajuraho village. An intrinsic part of Eastern Group of Khajuraho Temples, Jain Group has been declared as a UNESCO World Heritage Site along with other temples in Khajuraho Group of Monuments.

There are 31 Jain Temples in total. But from architectural point of view the Parshvanath, the Adinath and the Shantinath temples are relatively more important and noteworthy temples. The temple of Parshvanath, dominating the walled enclosure of the Jain Group, is probably older than the main temples of Khajuraho. The temple is believed to have been constructed by a prominent Jain family between 950 and 970 CE, during the reign of the Chandela king Dhanga. There is a 954 CE inscription on the left door jamb of the temple mentioning gifts and endowments of gardens by one Pahila. It is believed that originally the main deity of the temple was Lord Adinath. However, later in the year 1860, a statue of Lord Parshvanath was installed here and since then, it is known as the Parshvanath Temple.

The Parshvanatha Temple is the largest among the Jain temples of Khajuraho. It has an entrance porch, a small hall, a large hall, a vestibule, and a sanctum. The temple structure has an oblong architectural plan with projections at two ends. The ceiling of the entrance porch features chain and floral patterns, and a pair of intertwined flying vidyadharas. The outer walls of the temple have three bands of sculptures. These sculptures feature surasundaris, flying couples, dancers, musicians, and celestial beings. Despite being the Jain temple, the outer walls also depict Vaishnavite themes including sculptures of Lord Vishnu-Lakshmi, Rama-Sita, Balarama-Revati, Parashurama, Hanuman, Brahma and Yama.

Standing beside the Parshvanath Temple on the north side, is the exquisite little Adinath Temple. It is noted for its simple but well­ ornamented Shikhara and the three bands of sculptures on its semi­circular outer wall containing figures of Gandharvas, Kinnars, Vidyadharas, various Yakshas and Apsaras. The Adinath Jain temple contains an idol with an inscription dated to year 1027 CE during the rule of Chandela king Madanavarman.

The Shantinath Temple is a modern composite structure that incorporates sections of several temples and has several shrines. The temple is known for its 14 feet high standing idol of Lord Shantinath, the 16th Jain tirthankar. According to an inscription on it, it was installed in Vikrama­Samvat in1028 AD. This temple contains a large number of remarkably gracious images of Tirthankaras along with the rarely majestic sculpture of the parents of Tirthankar. The temple has a picture gallery, which displays a vast collection of photos of most significant Jain monuments of India in a chronological order of their establishment. The temple also houses a dharmasala, which is located in its close vicinity.