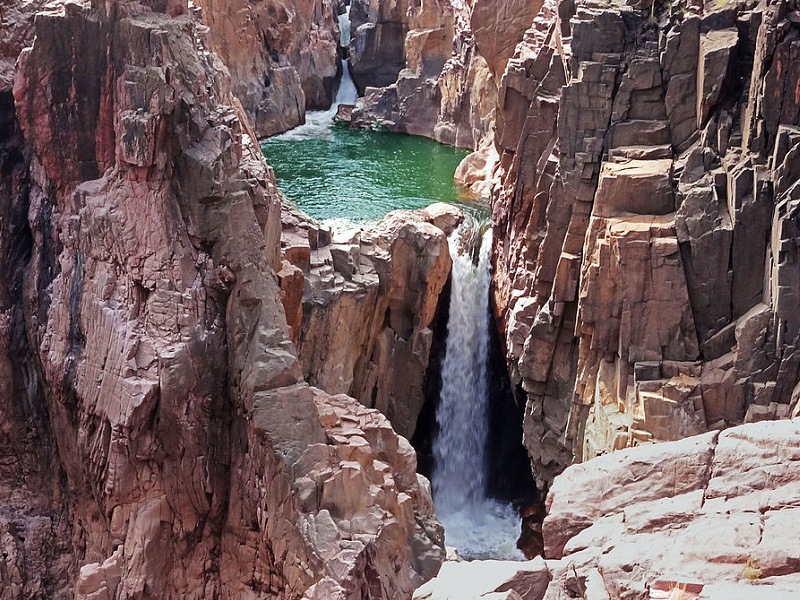 At a distance of 21 km from Khajuraho and 43 km from Panna, the Raneh Falls is a natural waterfall located in Chhatarpur district of Madhya Pradesh. It is one of the popular waterfalls in Madhya Pradesh and also one of the best Khajuraho tourist places.

Raneh Falls is an exquisite waterfall formed by River Ken running over one of the oldest rocks on earth, the Vindhya basalt. The falls is named after King Rane Pratap, the erstwhile ruler of the region. Situated in the close vicinity of Khajuraho, the waterfall emerged at the confluence of Ken and Khudar Rivers. Raneh Falls mark the edge of the Rewa plateau in Madhya Pradesh. The cascading waterfall is surrounded by wonderful rock formations.

The Ken River forms a 5 km long, and 30 m deep canyon made of pure crystalline granite in varying shades of colours ranging from pink and red to grey. It is popularly called 'The Grand Canyon of India' by the tourists, who have paid a visit to this cascade. There is a series of waterfalls in the canyon. Apart from a few large and small falls which are formed at the assemblage, some of the seasonal falls also appear during monsoons. The place has well laid platforms and watch towers to view the canyons.

The Ken Gharial Sanctuary is located near the confluence of Ken and Khudar Rivers. The Gharial, chief attraction of the Ken Gharial Sanctuary is a rare breed of reptiles which shares the same evolutionary line as the crocodiles. The sanctuary is closed during monsoons as monsoon is the breeding season of Gharials. There is also a hiking trail near the waterfall for the adventure seekers. One can also opt for a boat ride on the strong currents of the River Ken.

The best time to visit this waterfall is in the months of September to November.