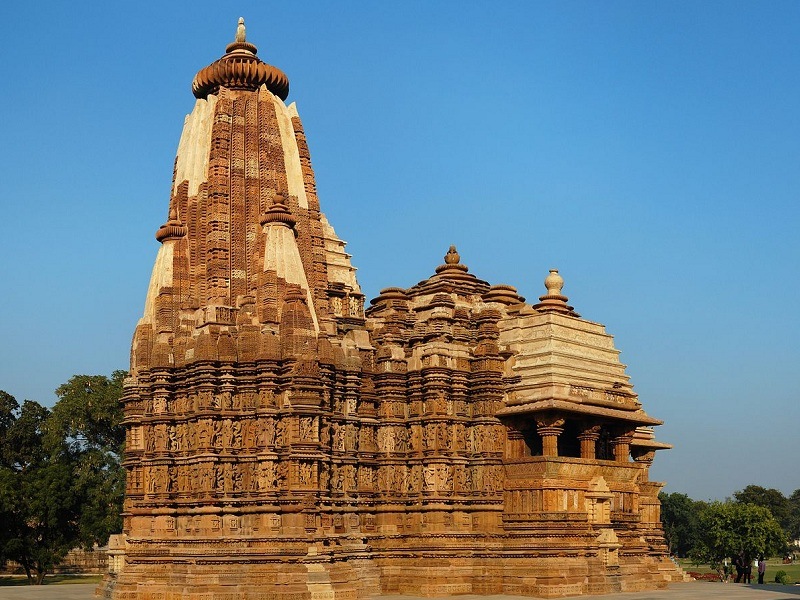 #3 of 23 Places to Visit in Khajuraho

At a distance of 1 km from Khajuraho Bus Stand, Devi Jagadambi Temple is an ancient temple situated towards the north of Kandariya Mahadev Temple in the historical town of Khajuraho. It is one of the prominent temples in the Western Group and also one of the best places to visit in Khajuraho.

Also known as Jagadambika Temple, Devi Jagadambi Temple was built by the Chandela rulers between 1000 AD & 1025 AD. Originally it was dedicated to Lord Vishnu, which is evident from the figures represented in the form of beautiful stone carvings of Lord Vishnu and his avatars on the two lower bands of the temple. Later the temple was dedicated to Goddess Parvati and then to Goddess Kali. It is believed that the idol in the temple is an image of Parvati, which was painted black to provide it an appearance of Goddess Kali.

The temple is situated on the common platform of the Kandariya Mahadev Temple but small in height. Believed to be slightly older than the magnificent Kandariya Temple, the temple possesses a three-part design. This temple essentially resembles the Chitragupta Temple in respect of design, dimensions and decorative scheme and the two temples, therefore, are quite close to each other in time as they are in space. It consists of a sanctum without pradakshina path, a maha-mandapa and an entrance porch. There is a huge image of the Devi Jagdambi in the inner sanctum.