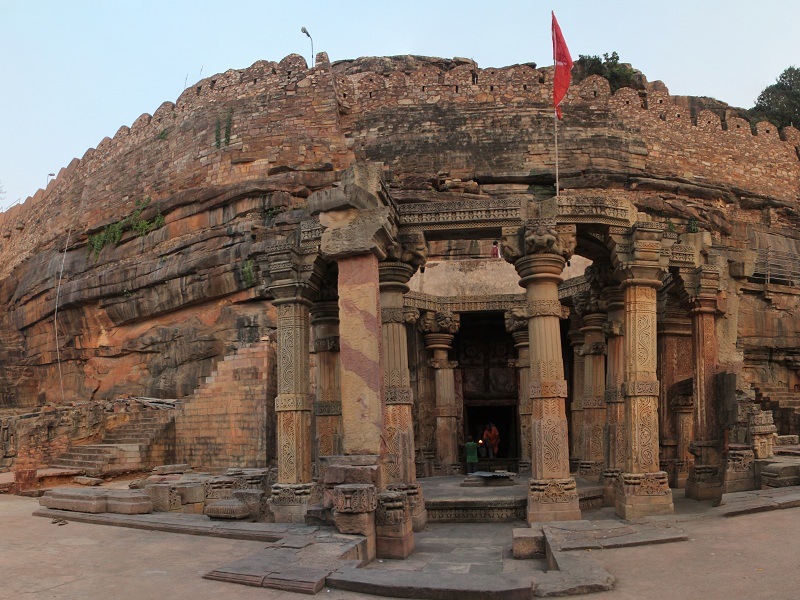 At a distance of 58 km from Panna and 104 km from Khajuraho, Kalinjar Fort is a historical fort situated at Kalinjar in Banda district of Uttar Pradesh. It is one of the ancient forts in Madhya Pradesh and also one of the popular attraction not to miss in a Khajuraho tour Packages.

Kalinjar Fort is located on an isolated flat-topped hill in the Vindhya Range, with a height of 244 m above the plains. It is one of the eight famous forts built by Chandela kings. It served many ruling dynasties in the region, from Guptas to Solankis to the Chandela dynasty. Although many rulers fought fierce battles to win this fort, the Chandelas managed to control it for a long time. Mughal invader Babur was the only commander in history to have captured the fort in 1526 CE. It was also the place where Sher Shah Suri met his death in 1545 CE. Kalinjar played a prominent part in history down to the time of the Revolt of 1857, when it was held by a small British garrison.

Kalinjar Fort is a treasure trove for history lovers with its rich collection of monuments, temples and artefacts. The main body of the fort lies from east to west, oblong in form, being nearly a mile in length by half a mile in breadth. The fort has a height of 30-35 meter and 8 meter wide. Big sand stone and granite pieces are used to build the fort. The name of the fort was coined by using Kalinjar, which is related to the incident of Lord Shiva consuming the poison.

There are two entrances to the fort, of which the principal one is on the north side towards the town and the other at the south-east angle leading towards Panna. The first entrance used to be guarded by seven different gates namely Alam Darwaza, Ganesha Darwaza, Chandi Darwaza, Hanuman Darwaza, Lal Darwaza, Bara Darwaza and Chauburji Darwaza. These are approached by a short flight of stone steps.

The temple of Neelkanth Mahadev, built over thousand years ago, is situated in the middle of the fort and is a masterpiece of architecture. The facade of the cave once had been very rich, but is now much broken. Just above the temple is a natural water source that never dries up and water continually drips onto the shivalinga. The shivalinga in the sanctum is made of a dark blue stone about 1.15m height and has three eyes. The rare stone images related to Lord Shiva, Shakti, Lord Vishnu, Lord Ganesh, Bhairava and Bhairavi are very attractive. The stone-carvings of animals, birds, apsaras and mithunas are also found here.

The palace of Aman Singh is another example of marvelous architecture. He was the descendant of King Chhatrasal. There are many legends associated with the palace which retell the colourful history of the Chandela dynasty. Raja Rani Mahal, Chaube Mahal, Rang Mahal, Venkat Bihari Temple and the pond of million teerthas are other proud possessions of the fort. Most of them have been converted into a museum to house hundreds of stone relics, frescoes, statues, rare sculptures and artefacts recovered from the fort.