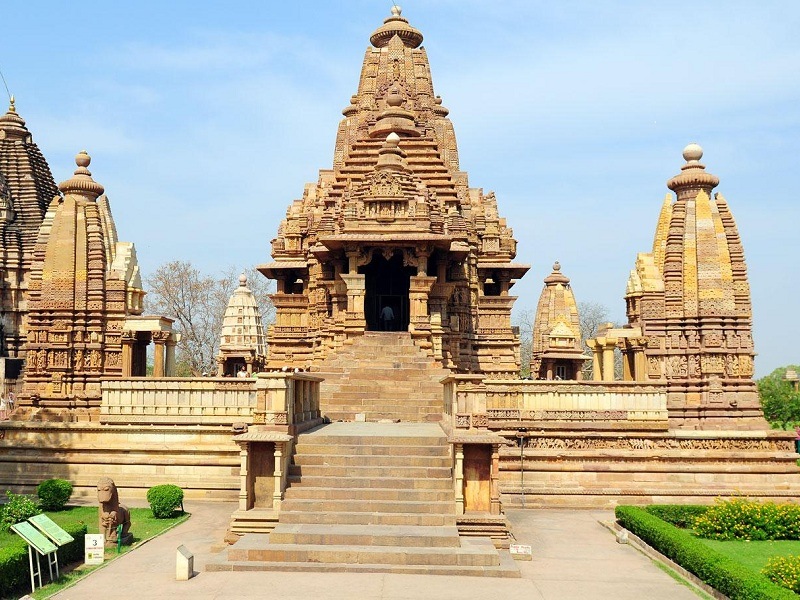 #1 of 23 Places to Visit in Khajuraho

Lakshmana Temple is dedicated to Lord Vishnu. The temple was built before 954 CE by Yashovarman, the seventh ruler of Chandela dynasty. It is believed that it took 20 years to build the temple. It is one of the first magnificent structures established in Khajuraho and also one of the three largest temples set in the Western Wing of the Khajuraho complex.

The temple is a Sandhara temple of the Panchayatana variety. The entire temple complex stands on a high platform and consists of all the elements of Hindu temple architecture. It has an entrance porch, mandapa, maha-mandapa, antarala, and garbhagriha. The platform of the temple is beautifully decorated with patterns of elephants and horsemen carrying out parade. Apart from this, scenes of battles, hunting and processions are also engraved on the borders of the platform of the temple. Lakshmana Temple is unique for its four subsidiary shrines at the four corners of its rectangular platform.

The temple has only one entrance on the east side. The entrance porch has a toran above the entrance. The porch wall has two rows of sculptures including divine figures and erotic scenes. The sanctum doorway has seven vertical panels. The central panel is decorated with the various incarnations of Lord Vishnu. The lintel depicts goddess Lakshmi in the center flanked by Lord Brahma and Lord Vishnu. The temple houses the three-headed and four-armed idol of Vaikuntha Vishnu. The central head is of human, and rest of the two depicts Lord Varaha and Lord Narshima. This image was originally brought from Tibet.

The top view of temple sanctum appears like Pancha-ratha. The western side of the temple is beautifully decorated with sculptures and the full figures of different forms of women with ornate jewellery. There are two open mandapas in front of the temple. The one towards the south is known as the Varaha mandapa which has a huge image of the standing Varaha. The carved idol of Varaha is placed along with the figures of more than 600 gods and goddesses.