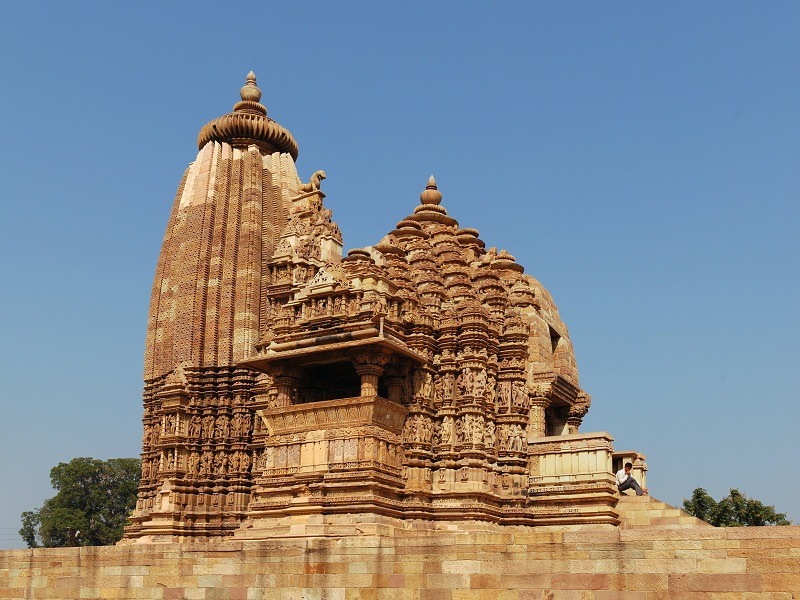 At a distance of 1.8 km from Khajuraho Bus Stand, Vamana Temple is a Hindu temple situated near Brahma Temple in Khajuraho. It is also a part of the Eastern Group of Khajuraho Temples and also one of the must see places in Khajuraho.

The fascinating Vamana Temple is dedicated to Vamana, an incarnation of Lord Vishnu. This beautiful shrine, built circa1050 - 75 AD, is one of the major relics of the Chandela dynasty. It forms part of the Khajuraho Group of Monuments, a UNESCO World Heritage Site. It stands as a reminiscent of the bygone era and boasts of marvelous architecture that is symbolic of the fine craftsmanship.

The architecture of the temple is similar to that of others located in Khajuraho. The temple features an entrance-porch, maha-mandapa, vestibule and sanctum. Its sikhara is embellished with a fret-work of chaitya-arches. It is also noteworthy for a peculiar roof known as samvarana over the maha-mandapa.

The sanctum is niradhara and enshrines an image of four armed Vamana flanked by Chakrapurusha on the left and Sankhapurusha on the right. The doorway of the sanctum has seven bands decorated with dancing ganas, mithunas and lotus petals. In addition to this, the ceilings of the balconied windows are carved with various postures of women. The exterior walls of the temple are adorned with intricate sculptures of apsaras and celestial nymphs. Other carvings that can be seen here exhibit varied facets of life like musicians, women in front of a mirror and dancers.