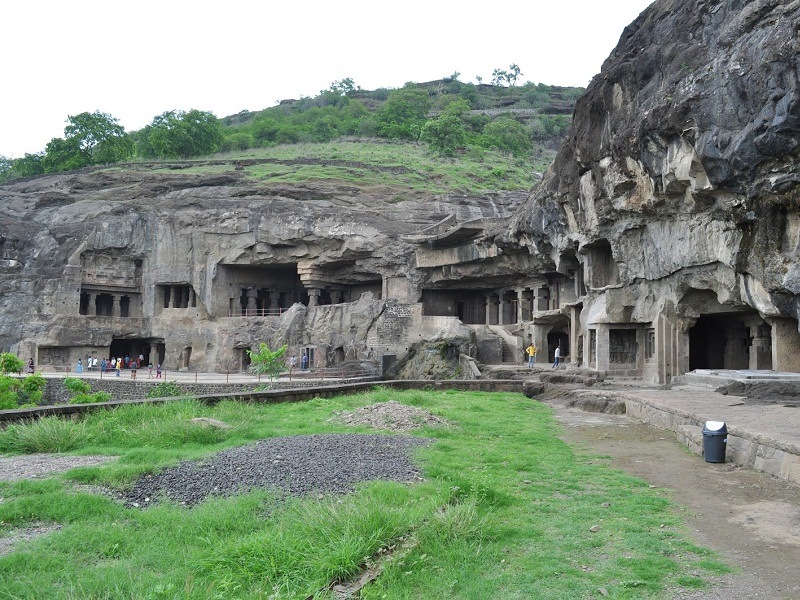 At a distance of 600 m from Ellora Caves Bus Stop and 1 km from Kailasanath Temple, Cave 1 to 5 are the Buddhist Caves situated at Ellora.

At Ellora, the Buddhists were the first to start excavation of caves. Their period of excavation can be dated between circa 450 AD and 700 AD. During this period, 12 caves were excavated by the followers of Buddhism. These 12 caves can be sub-divided into two groups based on the date of its excavation. Caves 1 to Cave 5 are the earlier among the twelve and are placed in a separate group from Caves 6 to 12 which are later in date.

These structures mostly consist of viharas or monasteries. The viharas are multi-storied and include rooms like living quarters, sleeping quarters, kitchens and other rooms. Some of these monastery caves have shrines including carvings of Gautama Buddha, bodhisattvas and saints.

Cave 1 is a plain vihara with eight small monastic cells. It may have served as a granary for the larger halls.

Cave 2 is much more impressive and is dedicated to Lord Buddha, reached through a flight of steps. A large central chamber supported by 12 great square pillars is lined with sculptures of seated Buddhas. The pillars are adorned with cushion brackets. The doorway into the sanctuary is flanked by a muscular Padmapani, holding a lotus, and a bejeweled Maitreya, the Future Buddha. Both are accompanied by their consorts. Inside the shrine is a stately seated Buddha on a lion throne.

Caves 3 and 4 have a similar design as Cave 2, but are in poor condition.

Cave 5 is known as Maharwada Cave because it was used by local Mahar tribes as a shelter during monsoon. This is a vihara (monastery) and measures 117 feet deep and 59 feet wide. The most striking feature of this monastery is two long and low stone benches placed at the center and stretches throughout its length, flanked by row of 24 pillars, 12 on each side. The monastery has a shrine for Buddha at the rear end and 20 cells for the monks. This cave could have been a place of preaching and learning of the Buddhist principles.