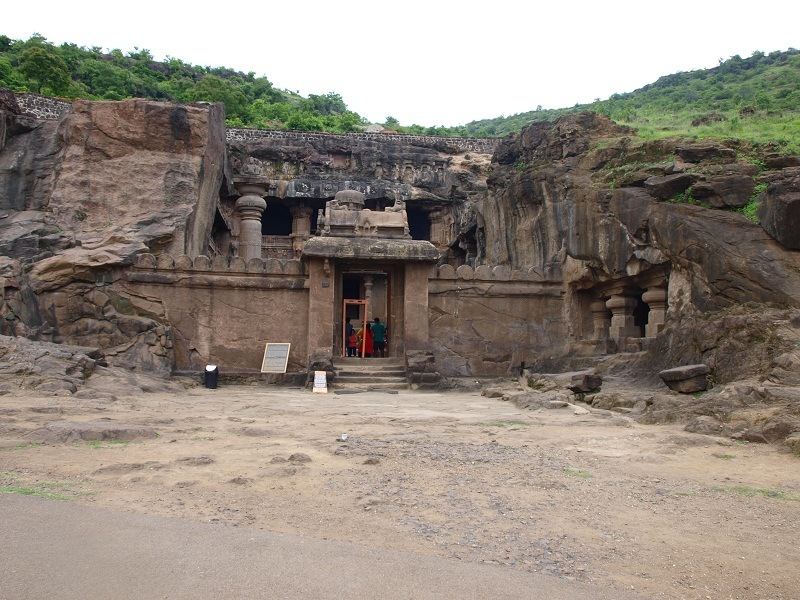 #4 of 21 Places to Visit in Ellora Caves

At a distance of 1.4 km from Kailasa Temple and 1.5 km from Ellora Caves Bus Stop, Cave 32 is a Jain cave situated to the north of Kailasa Temple in Ellora. Known as the Indra Sabha, it is the largest and finest of all Jain temples in Ellora.

Cave 32 is actually a series of shrines dedicated to Mahavira and other Jaina divinities aesthetically arranged in double storeys. The ground floor is plain, but the upstairs has intricate carvings. A simple gateway leads into an open court, with its sides adorned with lions, elephant friezes. There is a monolithic shrine of the Tirthankaras in the middle, a huge monolithic pillar known as manastambha is to its right and a colossal monolithic elephant to its left. The manastambha measures 28 feet in height and is crowned by four seated images facing the cardinal directions. The monolithic elephant reminds one of the elephants sculpted in the court of Kailasa, but, here it is more elegant and well preserved.

The important sculptures here are Ambika, the mother goddess, with a child seated on her lap, a lion beneath and a spreading tree above. Other panels within the hall show Indra seated on the elephant, Mahavira flanked by guardians of Tirthankaras. The ceiling is richly carved with a massive lotus at the center. Paintings on the ceiling of the upper Mandapa show couples and maidens flying through the clouds.

Timings: 6 AM to 6 PM on all days except on Tuesdays