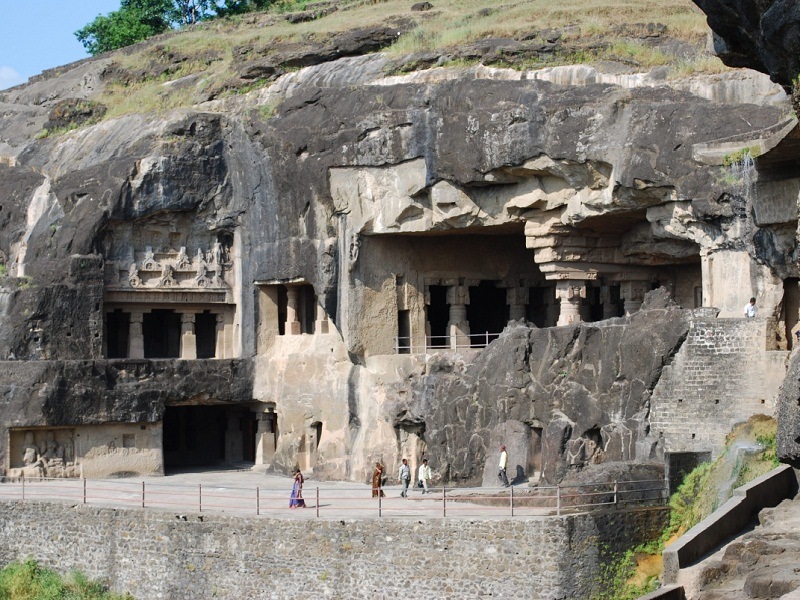 At a distance of 600 m from Ellora Caves Bus Stop and 500 m from Kailasanath Temple, Cave 6 to 9 are the Buddhist Caves (circa 450 AD and 700 AD) of later period situated at Ellora.

These structures mostly consist of viharas or monasteries. They are nothing but large multi-storeyed buildings carved into the mountain face, including living quarters, sleeping quarters, kitchens, and other rooms. Some of these monastery caves have shrines including carvings of Gautama Buddha, bodhisattvas and saints.

Cave 6 was carved in the 7th century AD and is home to two of the finest sculptures at Ellora. On the left is the goddess Tara, with an intense but kind expression. Opposite her on the right is Mahamayuri, the Buddhist goddess of learning, shown with her attribute, the peacock. A diligent student sits at his desk below. Significantly, Mahamayuri has a very similar Hindu counterpart, Saraswati.

Cave 7 is a large plain vihara which is about 51 feet wide by 43 feet deep and the roof supported by four columns. Three of the pillars were broken away. In the back wall, five cells are commenced, of which only two at the right end are finished. There are also three unfinished cells in the right end wall, and four in the left.

Cave 8 consists of two rooms and a shrine with a circumambulatory passage. The inner hall is 28 feet by 25, with three cells on the north side, and is cut off by two pillars at each end. The shrine has the usual dwarapalas and their attendants at the door; and inside is the seated Buddha with his attendants, but in this case Padmapani has four arms, holding the lotus and deer skin over his shoulders. At his feet are small figures of devotees and behind them is a tall female figure with a flower in her left hand and dwarfs over her head. The other tall male attendant has a similar companion on his left.

On the wall at the south entrance to the pradakshinapatha, is a sculpture of Mahamayuri, somewhat similar to the Cave 7. The outer room is 28 feet by 17, with a slightly raised platform. On the back wall of this outer room has a seated Buddha with Padmapani and Vajrapani on each side.

Cave 9 has a well carved facade, which contains a series of six seated Buddhas in ornate arches, in a sequence of three, two, and one, reading from bottom to top. Playful dwarfs and supporting yakshas appear between the arches, while bhadrasana Buddhas, probably the 'Seven Historical Buddhas', alternate with standing bodhisattvas, in the frieze below. On the back wall are two pilasters which divide the wall into three compartments. Buddha is seated in the center and in the left is Padmapani with female attendants.