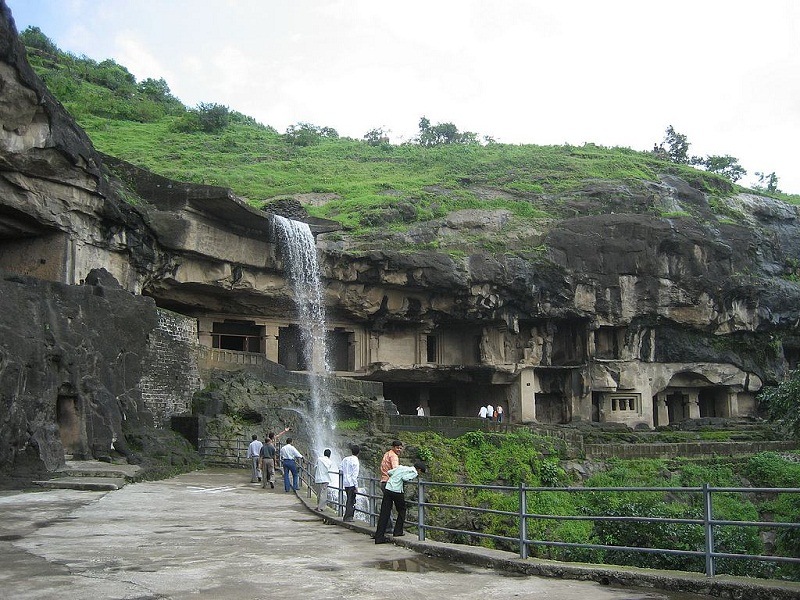 Cave 22, also known as Nilkantha. This is notable for the free standing damaged Nandi shrine, and separate shrines for the Matrikas. It has four pillars in front and two on each of the other three sides of the hall. On the walls of this hall have sculptures of Ganesha, the three Devis and a four armed Vishnu. There is a pedestal and a highly polished linga in the sanctum. The locals smear blue streaks upon the linga, so the name Nilkantha.

Cave 23 consisting of a partly double verandah with five doors entering into small cells, one of them containing a round pedestal and linga, with a Trimurthi on the back wall.

Cave 24 is a series of five low cells called Teli-Ka-Gana, the Oilman's Mill. It contains some small sculptures of no special interest.

Cave 25, also known as Kunbharwada, depicts Surya, the sun god, with his chariot drawn by seven magnificent horses and a female at each side shooting with a bow. This could have been a temple dedicated to the Sun God.

Cave 26 has four columns in front and two at the back with pilasters, which are quite of the Elephanta pattern. At each end of the spacious hall has a chapel raised three or four feet above the ground on a moulded base. In front of each pilaster of the vestibule is a female chauri bearer. There is a large square pedestal and linga in the sanctum.

Cave 27, also called as Milkmaid's Cave, is on the right edge of a ravine that separates it from the Cave 28. This cave has carvings of Lakshmi, Vishnu, Siva, Brahma, Mahishasuramardini, Varaha with Prithvi, and Vishnu in the form of Sesha Sayana, half finished.

Cave 28 is under the cliff over which the stream falls. This waterfall is also called Sita-Ki-Nahani. It has couple of cells, a vestibule and a shrine with dwarapalas at each side of the door.