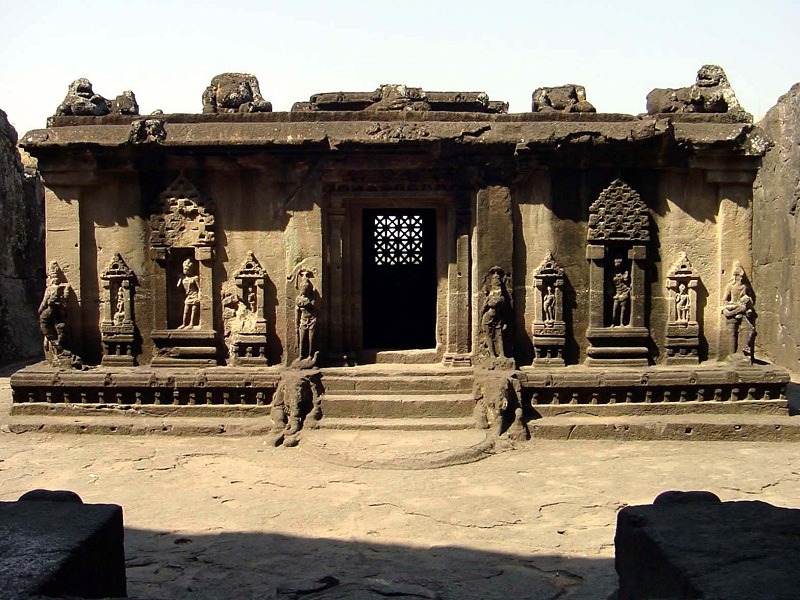 At a distance of 350 m from Kailasa Temple and 400 m from Ellora Caves Bus Stop, Cave 15, also known as Dashavatara Cave, is a Hindu cave situated just beside Cave 14 in Ellora. This is one of the finest and popular caves in Ellora.

There are 17 Hindu caves in all numbered 13 to 29, excavated out of the west face of the hill and datable from around 650 AD and 900 AD. The main examples of this group are Cave 14, Cave 15, Cave 16, Cave 21 and Cave 29. These caves occupy the center of the cave complex, grouped around either side of the famous Kailasa Temple in Ellora.

Cave 15 is known as Dashavatara Cave belongs to the period of Rashtrakuta king, Dantidurga. This cave mainly depicts Lord Shiva & Lord Vishnu in various forms. This two-storeyed structure has a large courtyard in which stands a monolithic Nandi mandapa. River goddesses flank the entrance. Earlier it was a Buddhist monastery but it was converted into a Shiva temple in the 8th century AD. Here, one can see some Buddha sculptures on the capitals of the first floor.

The first storey is reached by a flight of steps, which has eleven sunken compartments in which huge bas-reliefs of various gods and goddesses are carved. They are Ganapathi, Parvati, Surya, Siva and Parvati, Mahisasuramardini, Ardhanareeshwara, Bhavani or Durga, Uma in penance attitude, and Kali.

The second storey measures 109 feet by 95 feet inclusive of a shrine of linga and an antechamber. The walls on both sides of the hall are divided into six cells each. The cells on the north side show images of dancing Siva, a pitha for linga, Siva Parvati playing chausar, and Ravana shaking the Kailasa. Markandeya-anugraha and Gangadhara are depicted on two panels to the north of the entrance to the vestibule. The south wall has the representations of Govardhanadhari Vishnu, Sheshasayi Vishnu, Vishnu on garuda, Varaha, the boar incarnation of Vishnu, Vamana avatara of Vishnu, Narasimha avatara of Vishnu. Tripurantaka and Lingodbhava are depicted on two panels to the south of the entrance.