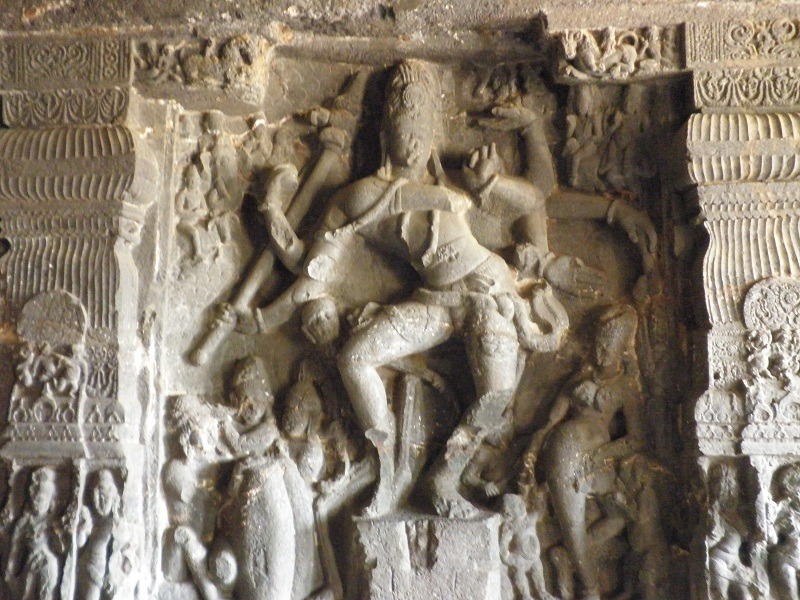 #2 of 21 Places to Visit in Ellora Caves

At a distance of 350 m from Kailasa Temple and 400 m from Ellora Caves Bus Stop, Cave 14, also known as Ravana Ka Khai or Abode of Ravana, is a Hindu cave situated beside Cave 12 in Ellora.

There are 17 Hindu caves in all numbered 13 to 29, excavated out of the west face of the hill and datable from around 650 AD and 900 AD. The main examples of this group are Cave 14, Cave 15, Cave 16, Cave 21 and Cave 29. These caves occupy the center of the cave complex, grouped around either side of the famous Kailasa Temple in Ellora. These excavations immediately follow the Buddhist caves and hence the earliest Brahmanical excavations are very much similar to the Buddhist ones. The walls of the Hindu caves are covered in lively bas-reliefs depicting events from the Hindu scriptures. All of the caves are dedicated to Lord Shiva, but there are also some images of Vishnu and his various incarnations.

Cave 14, a modest cave known as Ravana Ka Khai, dates from the early 7th century AD and was converted from a Buddhist vihara. This cave has a huge pillared courtyard, a mandapa with 16 kumbhavalli pillars, and a shrine containing a linga with a wide pradakshinapath around it. The doorway is guarded by the river goddess Ganga and Yamuna. The walls on both sides of the mandapa are divided into five compartments by kalasa-topped pilasters. The side walls of aisles of the courtyard are adorned with sculptural representations from Saiva as well as Vaishnava faith.

The north wall contains the sculptures of Bhavani, Gajalakshmi, Varaha, Vishnu and Lakshmi. The south wall also has the images of Mahisasuramardini, Lord Siva and Parvati playing chausar, Nataraja, Ravana shaking Kailasha Mountain, and Andhakasura. By the side of these sculptural representations on the southern wall of the circumambulation is the depiction of Saptamatrikas (Seven Divine Mothers), Chamunda with owl, Indrani with elephant, Varahi with boar, Lakshmi with garuda, Kaumari with peacock, Maheshwari with bull and Saraswati with hamsa.