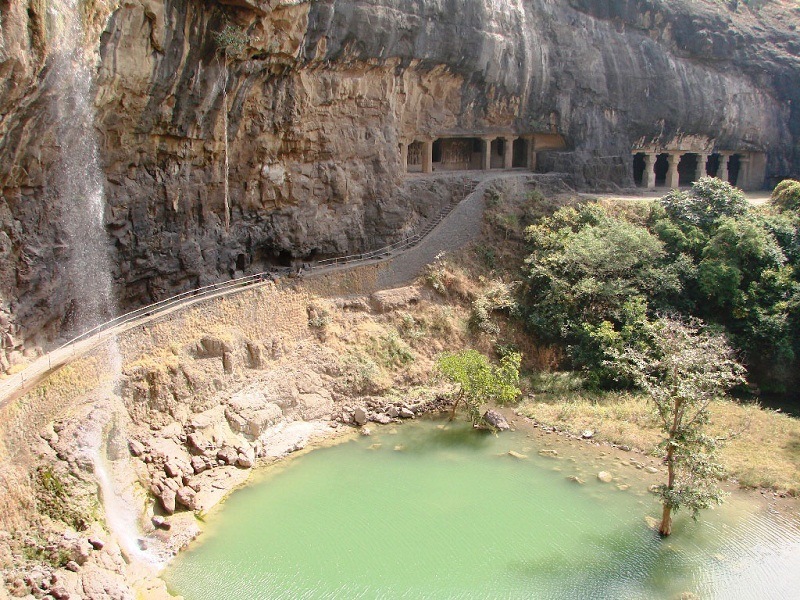 #8 of 21 Places to Visit in Ellora Caves

At a distance of 850 m from Kailasa Temple and 900 m from Ellora Caves Bus Stop, Cave 29 is also a Hindu Cave situated to the north of Kailasa Temple in Ellora. This is the earliest and last Hindu excavations to be completed at Ellora.

Also Known as Dumar Lena, Cave 29 is another important excavation at Ellora by the side of Sita-Ki-Nahani, a pool created by a waterfall in the Elaganga River. Dated to late 6th century AD, Cave 29 is said to be influenced by the pattern of the Elephanta Caves near Mumbai.

This cave is compared with the ones at Elephanta and Jogeswari Caves but this one is larger, finer and of a later age. This is the best preserved and largest of all the three, which were executed on the same plan. The Dumar Lena consists of an isolated shrine located within a group of halls arranged on a cruciform plan. The entire excavation extends to almost 250 feet. The shrine houses a huge linga entered through four entrances flanked by huge dwarapalas. Two large lions with small elephants under their paws guard the steps which lead to the hall from three sides.

The halls are adorned with six huge sculptural panels depicting various episodes connected with Lord Siva. They are Ravana Shaking Mount Kailasa, the celestial marriage between Lord Siva and Parvati, Andhakasuravadamurti, Siva and Parvati playing chausar, Nataraja, Lakulisa (form of Lord Siva). River goddesses are positioned outside the north and south entrance. This cave also has two mysterious sculpted depressions, one on south and other on the north. The exact function of these depressions is not clearly understood. Various identifications have been proposed, the prominent among them is that they are religious Vedic altars used at specific important religious rituals.