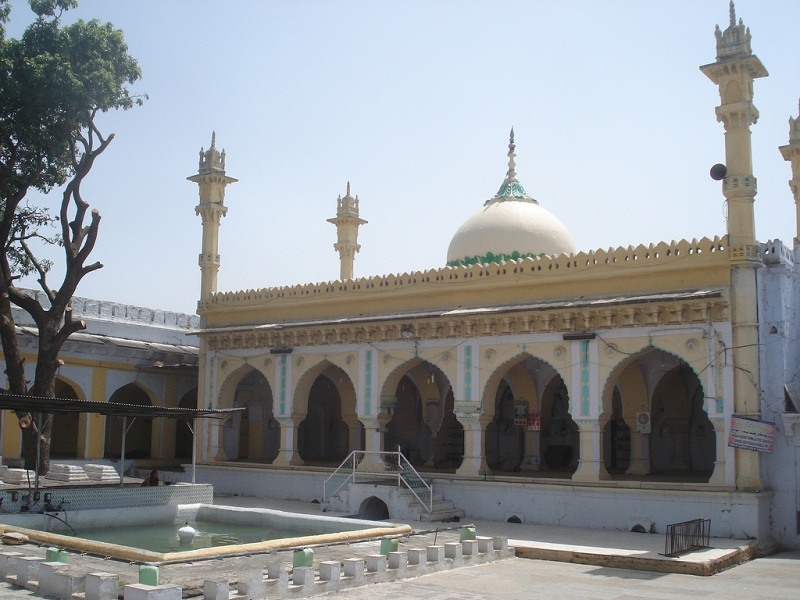 At a distance of 3 km from Ellora Caves and 25 km from Aurangabad Railway Station, Khuldabad also known as Khultabad is a municipal council and a taluka of Aurangabad district of Maharashtra. Initially it was known as Rauzaa as meaning garden of paradise.
Khuldabad is known as the Valley of Saints, or the Abode of Eternity, because in the 14th century, several Sufi saints chose to reside here. The Dargah of Zar Zari Zar Baksh, Shaikh Burhan ud-din Gharib Chisti and Shaikh Zainuddin Shirazi are situated here. Its historical significance is attested by the ruins of the city wall constructed by Aurangzeb (1658-1707 AD). It has seven gates namely, Nagarkhana, Pangra, Langda, Mangalpeth, Kunbi Ali, Hamdadi and a wicket gate called Azam Shahi.

The tomb of Aurangzeb is situated at the southeast corner of the tomb of Zainuddin complex, who died in 1370 AD. Zainuddin is a highly revered saint of the Muslims. He studied under Maulana Kamal-ud-din of Samana and accompanied him to Daulatabad. The mausoleum enclosed by a wall and the courtyard has two mosques at two different levels. The robe of the saint is preserved in a small room of the courtyard and exhibited once in 12 years. The tombs of Azam Shah and his wife are located to the east of Aurangzeb's tomb.

The mausoleum of Burhan-ud-din is located opposite to the tomb of Aurangzeb. Burhan-ud-din studied under Nizamuddin Aulia, the Sultan-ul-mashaikh of Delhi. He migrated to Daulatabad during the transfer of capital from Delhi to Daulatabad by Muhammad Tughluq and later made Khuldabad as his abode. He died in 1344 AD. The tomb is inside an enclosure. A mosque is located in front of the mausoleum. It is believed that some hair of the saint's beard is preserved in the shrine.

The tomb of Asaf Jah, the founder of Nizam dynasty of Hyderabad along with one of his consorts is found to the right of Burhan-ud-din's tomb. The graves are interred in a platform inlaid with white marble. A huge screen of red stone surrounds the platform. The tomb of Nasir Jang, the second son of Asaf Jah is to the left of the above. The tomb of Bani Begum, the consort of one of Aurangzeb's son is located to the west of these tombs. Khan Jahan's Lal Bagh garden was built by Khan Jahan, the foster son of Aurangzeb, who was the Viceroy of Deccan on two occasions. Red basalt has been used for the construction of the buildings and the tomb of Khan Jahan located inside, thus giving rise to the name Lal Bagh (Red Garden).

Several other tombs are found to the northwest of Khuldabad and near to the State Guest House. The prominent among them are the tombs of Malik Ambar, Tana Shah (the last of the Golconda Sultans), Nizam Shah, Zar Zari Baksh, and Ganj Ravan Baksh.