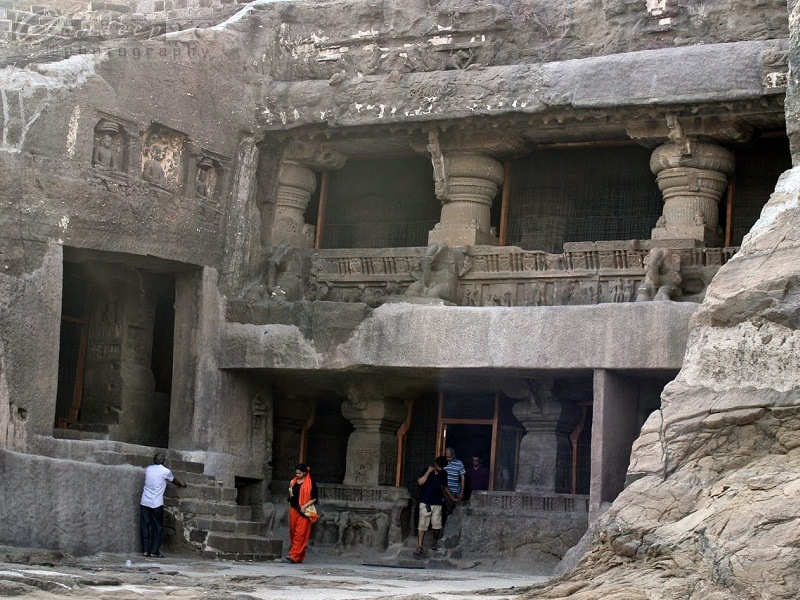 #5 of 21 Places to Visit in Ellora Caves

At a distance of 1.4 km from Kailasanath Temple and 1.5 km from Ellora Caves Bus Stop, Cave 33 is also a Jain cave situated just beside the Indra Sabha (Cave 32) in Ellora. Cave 33 is one of the popular Jain Caves in Ellora.

Cave 33, also known as Jagannatha Sabha, is the second largest in the Jain group of caves at Ellora. The court of the cave is much smaller than the Indra Sabha which contained some well-preserved sculptures. Cave 33 has five independent shrines, each with a columned mandapa and a sanctuary built on two levels. The hall has two heavy square pillars in front and four in the middle area. The shrine has carvings of Mahavira with Parsvanatha on the left and Gomata on the right. Indra occupies the left end of the verandah and Indrani on the right.

Cave 34 is the last in the series of Jain Caves. This cave has a small shrine situated at the extreme northern end which depicts the image of the Tirthankaras. The shrine door is carved with figures of Matanga, the Jain God of prosperity and Sidhaika, the Jain Goddess of generosity on either side. A seated figure of Mahavira is housed in the center of the shrine.