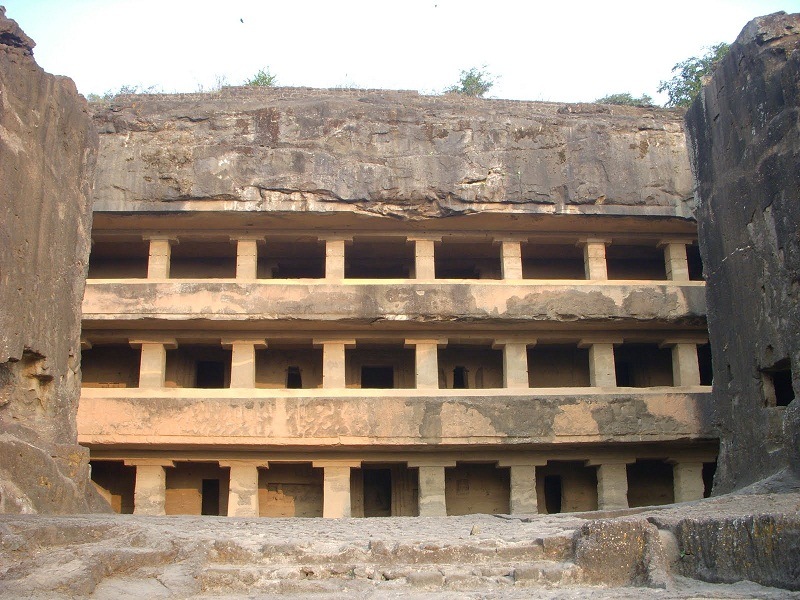 #7 of 21 Places to Visit in Ellora Caves

At a distance of 500 m from Ellora Caves Bus Stop and 400 m from Kailasa Temple, Cave 12 is situated beside Cave 11 and is one of the 12 Buddhist Caves in Ellora.

Cave 12, also known as Teen Tal is the largest monastic complex at Ellora, or even in the entire Maharashtra. The complex is in three storeys, hence the name Teen Tal locally. The huge complex is entered through a huge entrance carved out of natural rock, which leads into a large courtyard. A staircase leads to the first storey which has a shrine at the rear end. There are 9 cells arranged on the side walls of the first storey. Various sculptural representations of Buddha and subsidiary deities adorn the walls.

A staircase leads to the second storey which is a huge hall measuring 118 feet long and 34 feet in width. The upper floor of the Teen Tal is the most striking among the Buddhist Caves in Ellora. The hall is divided into three aisles by rows of 8 square pillars. This floor has 13 cells pierced on the end of hall and on the back wall. The shrine at the eastern side of the storey has a huge Buddha image in bhumisparsa mudra. In front of the Buddha image is Sujata offering payasa. On each side of the seated Buddha image is a row of five Bodhisattvas.

The top floor is reached by a flight of steps on the north. The top storey is a huge hall of nearly equal dimensions of the lower one, with a shrine and a huge antechamber on the east. The back wall of the hall contains fourteen representations of Buddha, seven on the north and seven on the south. The seven images on the north are in bhumisparsa mudra and are of Vipasyi, Sikhi, Vishvabahu, Krakuchhanda, Kanakamuni, Kashyapa and Sakyasimha, all are manusi Buddhas. The seven on the south are representations of divine Buddhas. The side walls of the antechamber are adorned by three images of female deities, three on each side. The shrine is adorned by a colossal image of Lord Buddha flanked by Padmapani and Vajrapani.