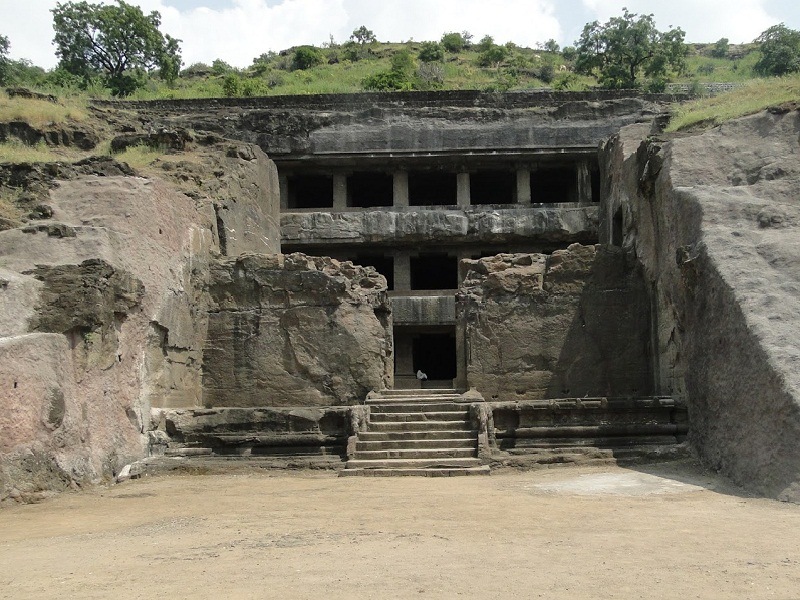 #6 of 21 Places to Visit in Ellora Caves

At a distance of 600 m from Ellora Caves Bus Stop and 500 m from Kailasa Temple, Cave 11 is situated just beside Cave 10 and is one of the 12 Buddhist Caves in Ellora.

Cave 11 has two levels and is therefore known as Dho Tal or Two Floors earlier. A basement level has been discovered in 1876 AD and it brings the total floors to three. Even after this the name Do Tal remained and is called so till date. This was partially excavated in 1877 AD, and revealed a verandah 102 feet in length and 9 feet wide with two cells and a shrine in which is Buddha with Padmapani and Vajrapani as his attendants.

A staircase leads to a similar verandah above, with eight square pillars in front, the back wall pierced with five doors. The first door is only the commencement of a cell. The second leads into a shrine with a colossal Buddha, his right hand on his knee and the left in his lap. In front of the throne is a small female figure holding up a water jar and to the right another sitting on a prostrate figure. The other cells too have figures of Buddha and his attendants.

The top floor is reached by a flight of steps on the north. The last floor has three shrines, however, one of them has not commenced. The other two cells have a Buddha image along with Padmapani and Vajrapani.