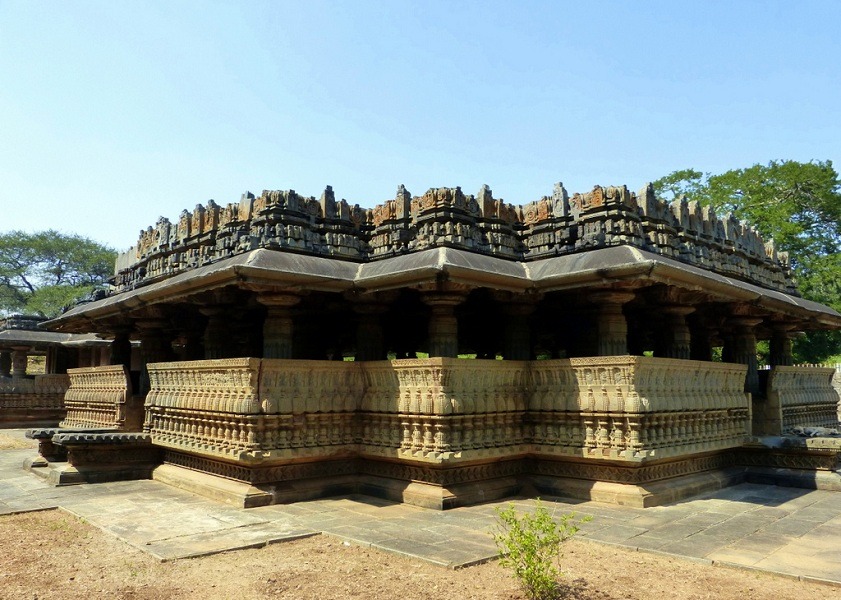 At a distance of 27 km from Hangal, and 68 km from Sirsi, the Nagareshvara Temple is an ancient Hindu temple situated at Bankapura in the Haveri district of Karnataka. Located inside the ruined Bankapura Fort, it is one of the historical temples in Karnataka built by Western Chalukyas, and among the must-visit places near Sirsi.

Dedicated to Lord Shiva, the Nagareshwara Temple was built in the 11th century in the Western Chalukya style. This eye-catching temple is also called Aravattu Kambada Gudi which means 60 pillars temple in Kannada. According to archaeologists, the temple suffered much damage when Bankapura fell to the armies of Firoz Shah Bahamani in 1406 CE and later again when it was occupied by the Bijapur Sultan Adil Shah. However, despite much plunder, the large temple with its majestic mandapa still retains some of its original beauty. The temple is a protected monument under the Archaeological Survey of India.

The temple is constructed with soapstone and comprises a small shrine and a closed hall (mandapa) that connects to a large open hall (Navaranga). Like all Western Chalukyan temples, the sanctum is connected to the large hall via a vestibule (antechamber). At the end of the large hall, facing the sanctum is an open Nandimantapa. The highlight of the large hall is the bell-shaped lathe-turned pillars. The main decoration on these pillars is the horizontal rings of moldings. The ceiling in the large hall is highly decorative with designs such as rosettes with imaginary beasts (Kirtimukhas) at the four corners. The doorjamb and lintel decoration are worthy of mention, especially at the entrance to the closed hall from the south. The sanctum is now empty but would have at one time housed a linga. There are numerous sculptures in relief of the Hindu gods such as Shiva, Vishnu, Ganapati, Brahma, and Kali.