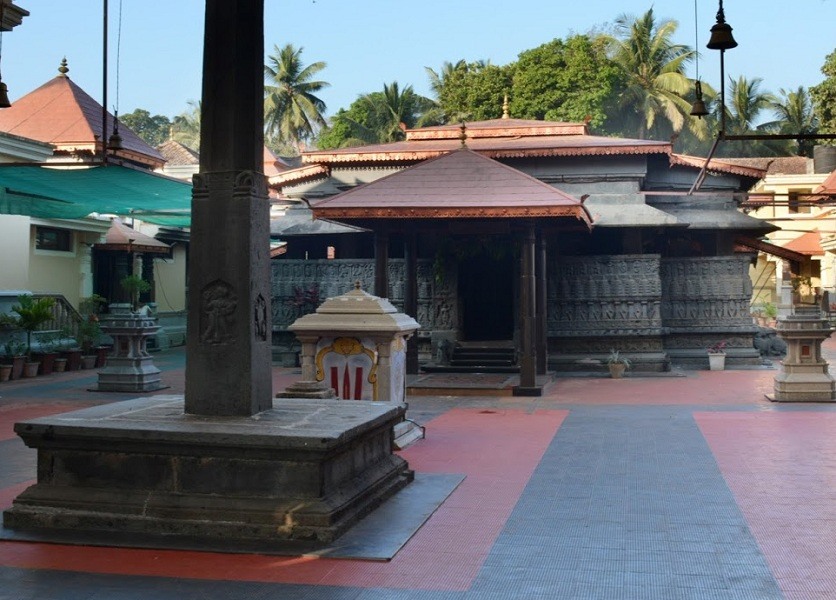 At a distance of 13 km from Benne Hole Falls, and 28 km from Sirsi, Sri Venkataramana Temple is a sacred Hindu temple situated at Manjuguni in Uttara Kannada district of Karnataka. It is one of the popular places of pilgrimage in Uttara Kannada, and among the must-visit places in Sirsi.

Located in the Sahyadri Hills, the Manjuguni Temple is dedicated to Lord Venkataramana and Goddess Padmavathi. According to Sri Venkatesha Mahatmya, the founder of this temple is Sri Tirumala Yogi, a saint. It is believed that the Lord of Tirupati settles down here in this temple while traveling around the globe hunting wild animals. Thus the temple is also referred to as Tirupathi of Karnataka or Chikka Tirupathi. During winter, this place will be covered by thick fog, and hence this place is called Manjuguni.

The Venkatramana Temple at Manjuguni is a huge complex built in Vijayanagara style. The temple has a huge Dwaja Sthambha, Bali Peetha, and then the entrance to the main shrine, which includes the facade, the hall, and the Navaranga, Sukhanasi, and sanctum sanctorum of the original temple. The main idol here is assumed to be more than 1000 years old. The special feature of the idol here is that the Lord is holding an arrow and bow as symbols of assurance and protection to the devotees. His consort Goddess Padmavathi is on the right side. Navaranga hall has several pillars decorated with beautifully carved figures of gods and goddesses that attract the attention of every visitor. There is also a small lake called Sri Chakrateertha in the temple complex.

Manjuguni Rathothsava (Theru) is the main festival celebrated here every year in March and is considered one of the biggest festivals in the Uttara Kannada District. Thousands of pilgrims from various parts of Karnataka come to this temple and offer prayers to the Divine couple.