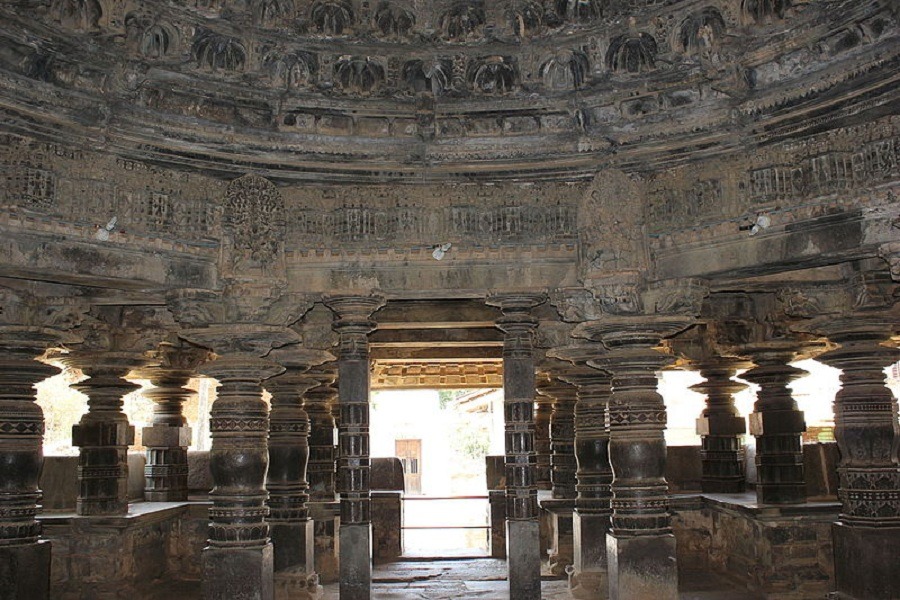 At a distance of 45 km from Sirsi, the Tarakeshwara or Tarakeshvara Temple is a Hindu temple complex located in Hangal, Karnataka. It is one of the ancient temples in the Malnad region of Karnataka, and among the top places to visit near Sirsi.

Dedicated to Lord Shiva, the Tarakeshwara Temple dates back to the 12th century AD and is considered to be an architectural marvel. The temple was the most significant contribution of the Kadambas to the history of the town. However, the town and the temple came into prominence during the rule of Kalyani Chalukyas who were the most powerful in the Deccan region during their period. They made massive architectural innovations and additions to make it into the present form. It is a protected monument under the Archaeological Survey of India.

Built with grey-green chloritic schist, the temple is a fine example of the typical Chalukyan style of architecture with influences of Dravidian and Nagara styles. The main temple consists of a Garbhgriha or sanctum with adjoining enclosures like the Antarala, Navaranga, Sabhamandapa, and Mukhamandapa. The sanctum sanctorum houses Lord Tarakeshwar is in the form of a linga along with sculptures of Vishnu, Brahma, Karthikeya, and Nandi.

The major attraction of the temple is the main hall which has a large domical ceiling in the form of a lotus. The elaborately-carved structure is 9 m in diameter, and a huge stone, 6 m in diameter, forms the ceiling of this structure. The stone, cut into the shape of a lotus, is supported by eight pillars. The decorations on the pillars include very detailed carvings of elephants and diamond-shaped motifs. Adjacent to the main hall is another hall called Nandi Pavilion dedicated to Nandi, the vehicle of Lord Shiva. This 12-pillared hall has a leaning balcony setting. Both these halls have stepped pyramidal outer roof.

The exterior walls are profusely ornamented with sculptures of miniature temples and other scenes from the Ramayana. The sculpture of a hero fighting a lion, which is the emblem of the Hoysala kingdom, is also present. In front of the main hall, one will also come across the memorial stones with religious and military scenes. The Ganesha temple located to the northeast of the Tarakeshwara temple has been built in the Nagara style and is worth a visit.