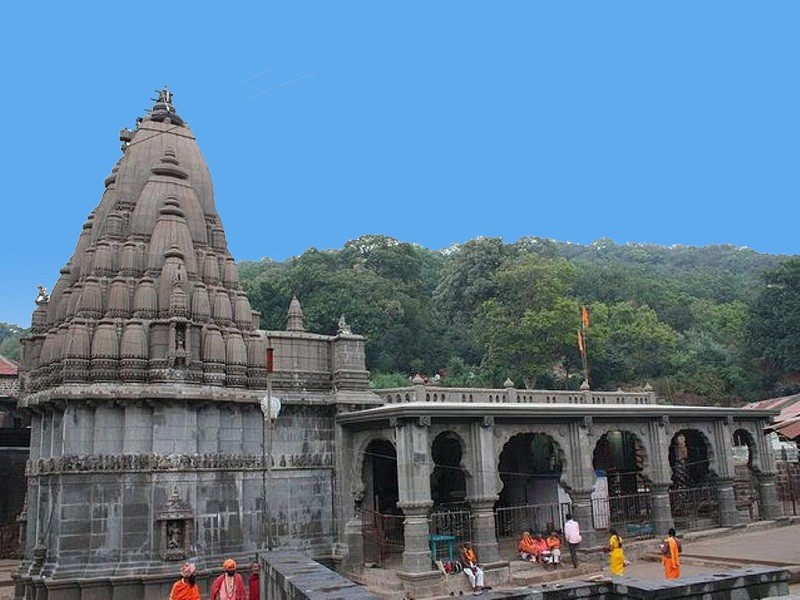 At a distance of 111 km from Pune, 124 km from Lonavala, 210 km from Nashik, and 224 km from Mumbai, Bhimashankar Temple is an ancient pilgrimage center located near Karjat in the Ghat region of Sahyadri hills in Maharashtra. This is one of the top places of pilgrimage in Maharashtra, and also one of the best pilgrimage places to visit near Pune.

Bhimashankar Temple is dedicated to Lord Shiva and is considered one of the 12 holy Jyotirlinga shrines in India, and among the must-visit places as part of Pune tour packages. The other Jyotirlinga shrines in Maharashtra are Vaidyanath near Parli, Trimbakeshwara near Nashik, Grishneshwar near Aurangabad, and Aundha Nagnath Temple in Hingoli. Bhimashankar is also the source of the river Bhima, which flows southeast and merges with the Krishna River near Raichur.

It is believed that the original temple of Bhimashankar was built in the 12th century CE. However, no evidence remains dating to that period has been found. The temple was renovated by Chimaji Antaji Bhide Naik in 1733 CE followed by some repair works by Dikshit Patwardhan in 1766 CE. A well was constructed in the complex by Raghunathrao Peshwa. The famous minister of the Peshwas, Nana Phadnavis carried out a lot of renovations, including the construction of the shikhara. It is one of the famous places to visit in Pune.

According to the legend, a demon named Bhima lived with his mother Karkati in the forests of Dakini. Once he asked his mother about his existence and his father. To this, his mother replied that his father's name was Kumbhakarna and he was killed by Lord Rama, an incarnation of Lord Vishnu. This infuriated Bhima and he vowed to avenge his father. To achieve this he embarked on a severe penance to please Lord Brahma. The compassionate creator was pleased by the dedicated devotee and granted him immense powers.

He created havoc everywhere disturbing all rishis and sadhus in their pious activities. He defeated King Indra and dethroned him. All this angered all the gods and all went to Lord Shiva for help. Lord Shiva agreed to help them. He also defeated a staunch devotee of Lord Shiva - Kamarupeshwar and ordered Kamarupeshwar to worship him instead of Lord Shiva. The cruel Bhima raised his sword to strike the Shivlinga, to which king Kamarupeshwar was doing abhishek and pooja. As soon as Bhima raised his sword, Lord Shiva appeared before him in all his magnificence and luster. The terrible war began. It was then that Lord Shiva reduced the evil demon to ashes. All the Gods requested Lord Shiva to make this place his abode. Lord Shiva thus manifested himself in the form of the Bhimashankar Jyotirlingam. After the battle with the demon, the sweat poured forth from the body of Lord Shiva took the form of the Bhima River.

The present temple sanctum and the shikhara are built in the Nagara or Indo-Aryan style and have a strong influence of Rajasthan and Gujarat on the figurines and motifs of the temple. Intricate carvings adorn the pillars and door frames of this temple, raised over a Swayambhu Linga. The temple grounds encompass another smaller shrine dedicated to Lord Shani. There is a shrine known as Kamalaja near the Bhimashankar temple. Gupt Bhimashankar, Sakshi Vinayak, Hanuman Lake, Nagphani, and Bombay Point are the other places to visit in Bhimashankar.

Besides being a pilgrimage, Bhimashankar is also a biodiversity hotspot. The jungle surrounding the temple has been declared a wildlife sanctuary. One can spot leopards, barking deer, sambar, and hyena. Bhimashankar is also famous among adventure enthusiasts. The mountain in and around Bhimashankar is popular for trekking, hiking, and rock climbing.