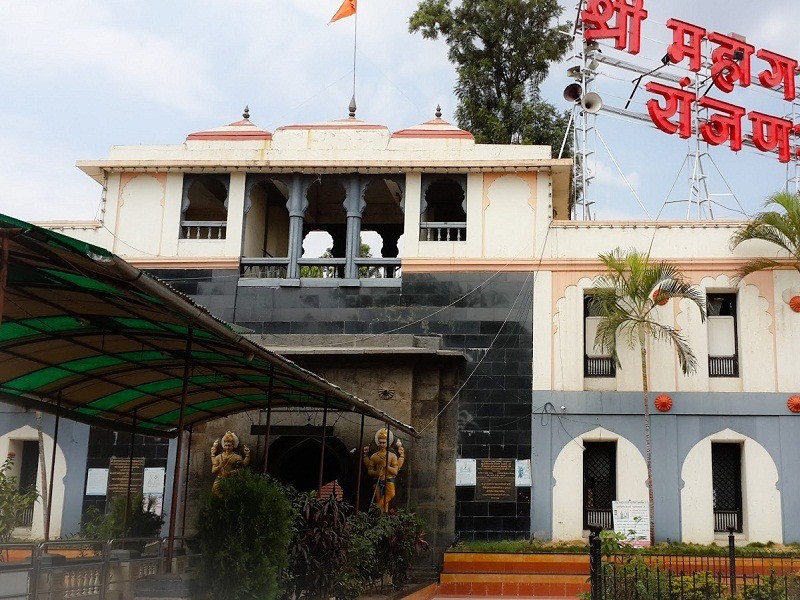 At a distance of 50 km from Pune, Sri Maha Ganapati Temple is situated at Ranjangaon in Shirur Taluk of Pune district. This is one among the Ashtavinayak temples in Maharashtra and also one of the popular places to visit in Pune.

The stone pillars of the temple indicate that the temple was built during the 9th or 10th century during the rule of Peshwas. Madhavrao Peshwa made a room in the basement of the temple to keep the idol of Lord Ganesh. Later on Sardar Kibe of Indore renovated it. Nagarkhana is situated above the entrance gate. According to the legend, the village Ranjangaon is considered to be the place where Shiva himself sought the blessings of Ganesh and ultimately destroyed Tripurasur.

The temple faces east and has an imposing main gate which is guarded by two statues of Jaya and Vijay. The temple is designed in such a way that during Dakshinayan, the rays of the sun fall directly on the idol. The idol of Lord Ganesh is seated on a lotus with his consorts Siddhi and Riddhi on both sides. He is facing east in a cross legged sitting posture with broad forehead and the trunk turned towards the left. It is said that the original idol is hidden in the basement, having 10 trunks and 20 hands and is called Mahotkat. However, the temple authorities deny existence of any such idol.

The temple celebrates a special 6 day festival on the occasion of Ganesh Chathurti, during which Mahabhog is offered to the temple deity on the fifth day. During this festival, the temple deity is also taken around the area in a flower be-decked palkhi (palanquin). Large crowds gather during this festival to witness the wrestling matches which are specially organized at this time.