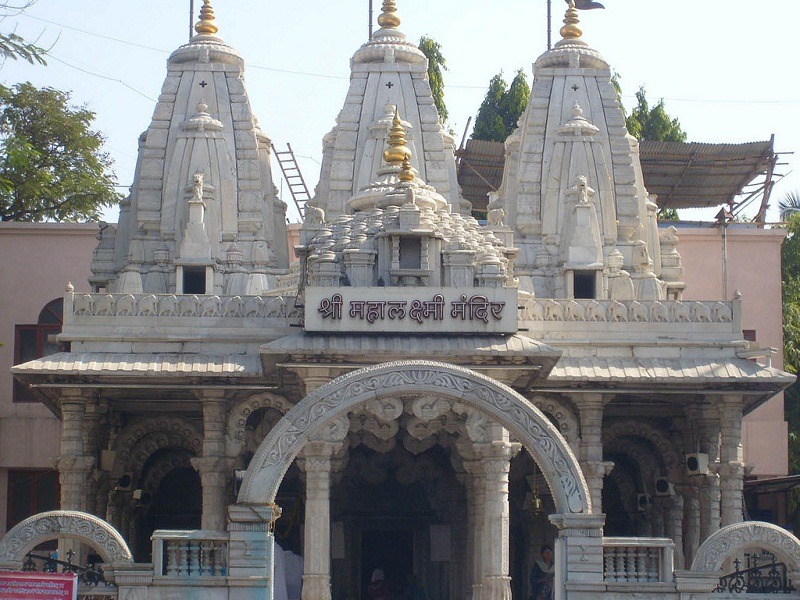 At a distance 6 km from Pune Junction, Sri Mahalaxmi Temple is beautiful temple situated at just opposite to Sri Sarasbaug Ganesh Temple in Sarasbaug area of Pune, Maharashtra. It is one of the top pilgrimage places to visit in Pune City.

The temple is dedicated to Goddess Mahalaxmi, Mahakali & Maha Saraswati. It was founded in the year 1972 by Late Sri Bansilal Ramnath Agarwal. It took almost 12 years to complete the work. Entire temple has been developed using white marble that further adds an additional grandeur to this majestic architectural specimen.

The temple was built in Dravidian style of architecture. The shikhar of the Mahalaxmi temple is 55 feet tall and 24 feet wide. The temple possesses 3 magnificent peaks which are masterfully carved with minute carvings and sculptures of several Hindu gods and are perfectly enthroned on the three deities present in the temple. The deities of Goddesses Sri Maha Saraswati, Sri Mahalaxmi and Sri Mahakali are six feet tall and have been carved out of pristine marble.

The best time to visit Mahalaxmi Mandir is during the Navratri festival. During Navratri, the entire temple and nearby areas are endowed using lights and other decorations. Several programs are conducted during these days when a huge number of devotees visit the temple. The temple is also mostly visited by people coming to Sarasbaug and Parvati Hill.