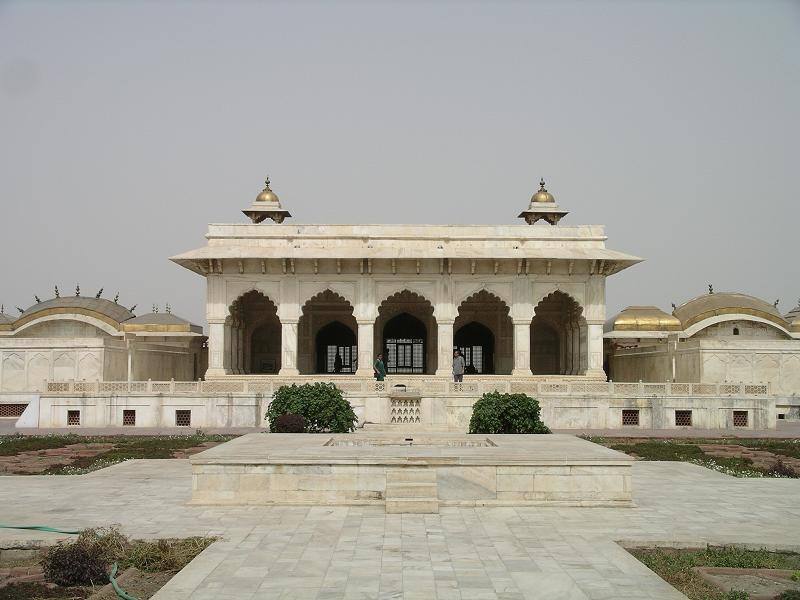 At a distance of 4.5 km from Agra Cantonment Railway Station and 2.5 km from Taj Mahal, Khas Mahal, also called Aramgah-i-Mualla (rest house of the noble) or Aramgah-i-Muqaddas, is situated inside the Agra Fort.

Khas Mahal is the most beautiful building in the fort and was built by Shah Jahan during 1631-1640 AD. The building comprises open Terraces and a hall, flanked by a pavilion on either side serving as partitions. The structure is erected on a sufficiently elevated platform paved with marble. It is the royal palace of the Emperor. The palace includes curtain walls, elegant tanks, fountains and a waterfall surrounded by living apartments with courts and verandahs.

The interiors of the palace are adorned with gold work, mural paintings, ornamental designs and floral designs. The pavilions of the Khas Mahal were constructed using red sandstone and coated with white shell plaster. They contained beautiful golden work and fresco paintings.

The Khas Mahal has heavily adorned ceilings and alcoves in the walls around. They once contained portraits of Mughal rulers. Iron rings visible on the ceilings were where chandeliers once hung. In front of Khas Mahal is the Anguri Bagh or the Grape Garden, built in 1637 AD by Shah Jahan. Anguri Bagh is divided into four parts to give the famed Char Bagh look. There is a water tank with a fountain in the center. The garden was meant to be a private area of relaxation for the royal ladies. Hammams or imperial bathhouses adorned with exquisite wall paintings in royal blue and gold were located to its northeast.

The projecting tower to the east of the Khas Mahal is known as the Octagonal Tower (Musamman Burj) which is another beautiful monument at the Agra Fort. It is an octagonal tower which is open at five sides and makes an excellent balcony for a view of the riverside and the Taj Mahal. It was originally made of red sandstone and used by emperors Akbar and Jahangir. Shah Jahan got it changed to white marble. Shah Jahan was deposed by his son Aurangzeb in 1658. Thereafter, he spent the last eight years of his life under house arrest at Musamman Burj, aided by his daughter Jahanara Begum.