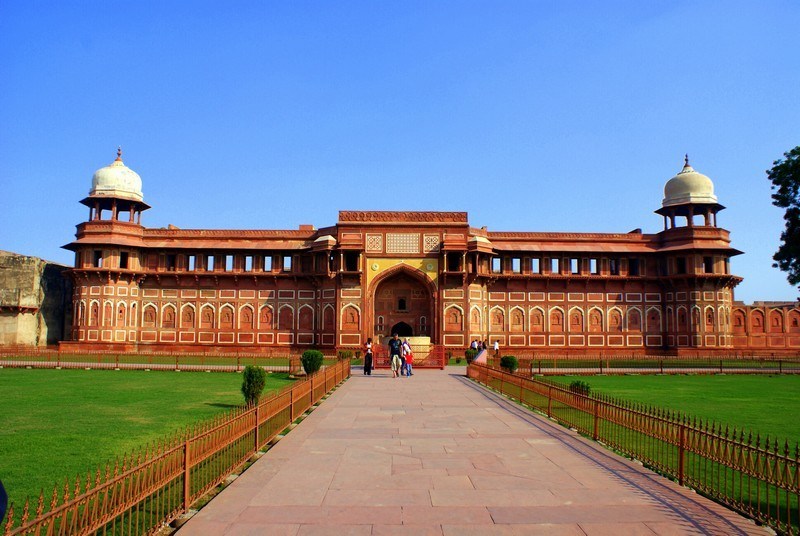 At a distance of 4.5 km from Agra Cantonment Railway Station and 2.5 km from Taj Mahal, Jahangiri Mahal is the most noteworthy building inside the Agra Fort.

Jahangiri Mahal is the first monument that comes in the view once visitors enter the fort from the Amar Singh Gate. Jahangiri Mahal was built by Akbar during 1565-69. This was the principal zenana, and was used mainly by the Rajput wives of Akbar. It is one of the earliest surviving buildings of Akbar's reign. Jahangir in his memories has clearly mentioned that the buildings were erected by his father Akbar. Mughal empress Nur Jahan used this as her residence.

The palace is made of red sand stone and displays a generous blend of Hindu and Islamic architectural styles. Its outer walls rise with the massive ramparts of the fortress on the river. A gateway leads to an inner courtyard surrounded by large halls which are extensively adorned with Persian style stone carvings. The most striking feature of the palace is the decorative stone brackets that support the beams. There is a huge bowl called Hauz-i-Jahangiri that is carved out of a single piece of stone. This was used as a container for fragrant rose water.

Shahjahani Mahal is situated in between the white marble Khas-Mahal and the red stone Jahangiri Mahal inside the Agra Fort. This Mahal is the earliest attempt of the Mughal ruler Shah Jahan to convert an existing red stone building in accordance with his taste and it is his earliest palace in Agra Fort. It has a large hall, side rooms and an octagonal tower on the river side.