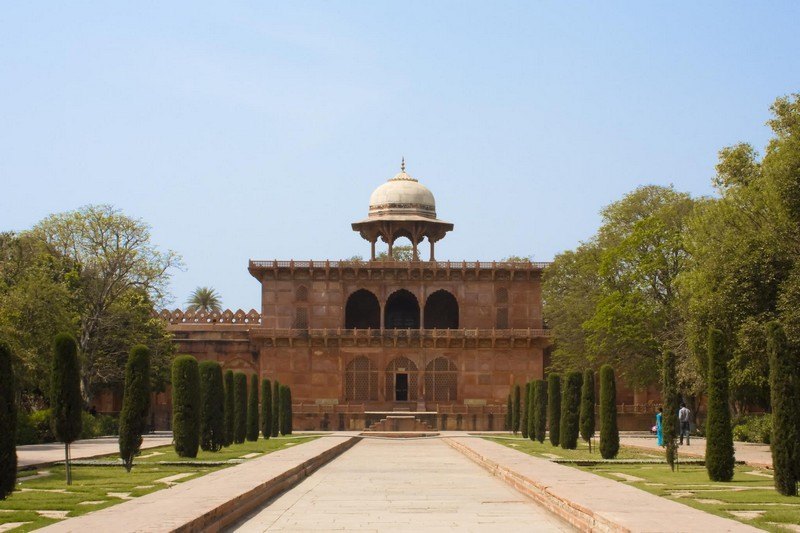 Travel Tips: This is located inside Taj Mahal Complex and visited along with Taj Mahal

At a distance of 6 km from Agra Cantonment Railway Station, Taj Museum is one of the most popular museums in Agra and is located in the ground floor of western Naubat Khana, also known as Jal Mahal, with in the Taj Mahal complex.

The museum was established in 1982. It is a double storied building having a quadrangle projection outside and is built on a raised platform. It is a big museum comprising of two floors and has three galleries along with a chief hall. The museum displays various exhibits relating mostly to the construction of the Taj Mahal and to the period of its builders. Totally 121 antiquities are on display, which are broadly categorized as Mughal miniature paintings, manuscripts, government decrees, specimen of calligraphy, arms, utensils, plans and drawings of Taj Complex, paintings, specimen inlay work, marble pillars, etc.

In main hall the paintings of Shah Jahan and his favourite wife Mumtaz Mahal both on ivory, encased in ornamental wooden frame, replicas of coins minted in Agra are on display. Exhibits also include paintings from the famous Persian epic Shahnama of Firdausi, which is a manuscript of Chaihl Majlis.

The first gallery contains plans and colour drawings showing the salient features of the architecture of Tai Mahal. The most worthwhile is a site plan, front elevation of the tomb and other details are recorded on this site plan. The second gallery display some jade and porcelain objects like Quaran stand carved of Jade, a beautiful ornamented spouted vase carve of jade, mirror mounted on stone, bowl and dishes of Celadon ware. Arms like swords, daggers and a world map showing the places from where stones were imported for inlay work of Taj Mahal along with specimens of these semiprecious stones are also in display.

In third gallery important royal Farmans and documents, specimen of famous calligraphy of the period, two paintings of Taj Mahal by British artist Daniel in the year 1795 AD are displayed. An interesting order of General Perron of the period of Shah Alam II recording the details of the auction of fruits in the garden of the mausoleum of Taj ganj is also displayed.