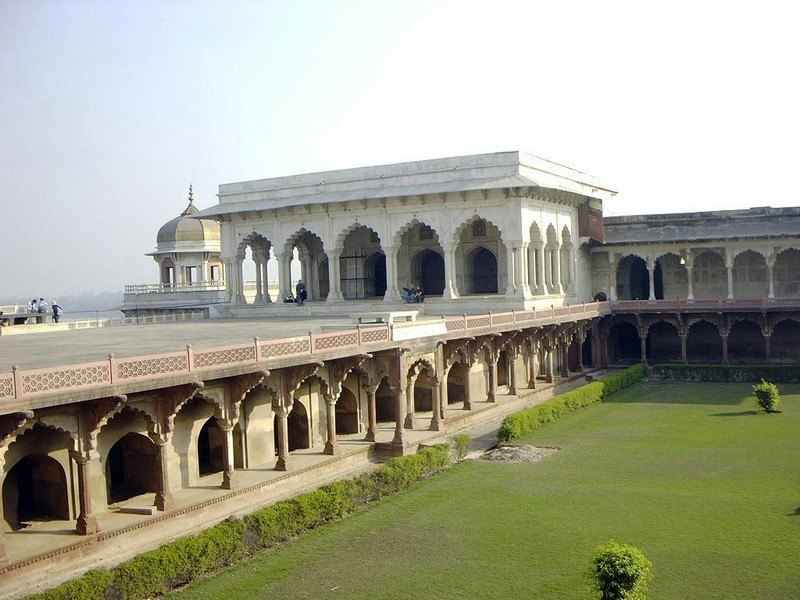 At a distance of 4.5 km from Agra Cantonment Railway Station and 2.5 km from Taj Mahal, the Diwan-i-Khas or Hall of Private Audience is situated backside of the Machchhi Bhawan inside the Agra Fort.

Diwan-i-Khas or Hall of Private Audience was built by Shah Jahan in the year 1635 AD. It was used by the emperor for holding cultural events and meetings important guests such as kings, ambassadors and nobles in private and to deal with important affairs of the state.

It consists of two large halls, an outer columned hall and inner closed hall, both connected by three archways. The outer hall is covered by a flat roof supported on multifoil arches springing from exquisitely fine marble pillars. The marble pillars are inlaid with semi-precious stones and coloured flower patterns. The hall is exquisitely decorated with carvings and flat wooden ceiling which used to be covered with gold and silver leaves to imitate the rays of the sun. The hall represents the royal accesses and thus the interior hall has Persian inscriptions inlaid in black stone. The hall was remarkable for the presence of the celebrated Takht-i-Taus (Peacock Throne) which was made in 1634 AD and placed here. Later it was shifted to Delhi after the construction of the Red Fort in 1648.

The Inner hall, about which Abdul Hamid Lahauri recorded as Tambi Khana, has Shah-Nashin alcoves with a raised seat for the Emperor. The walls in between the two halls have beautiful jalis, beautifully designed and finished with floral patterns.