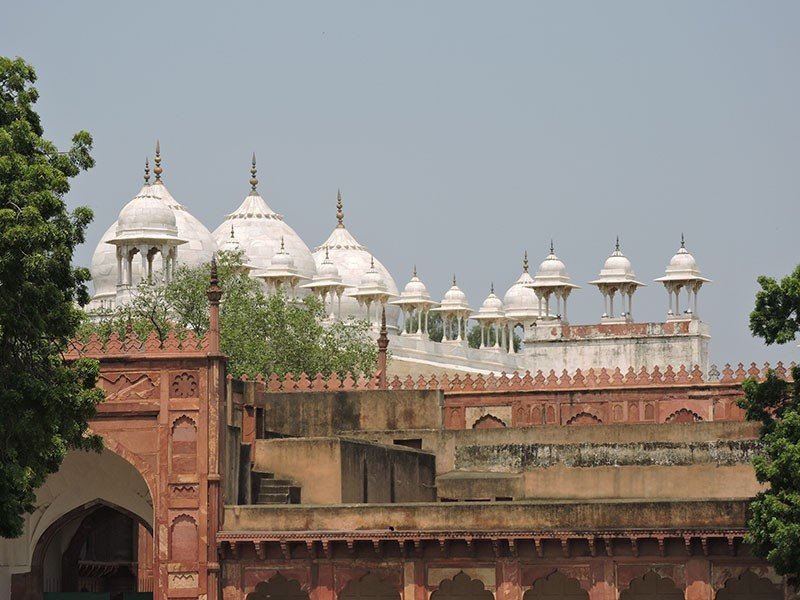 At a distance of 4.5 km from Agra Cantonment Railway Station and 2.5 km from Taj Mahal, the Moti Masjid or the Pearl Mosque is situated to the north of Diwan-i-Am complex inside the Agra Fort.

Moti Masjid was built by the Mughal Emperor Shah Jahan during 1648-54 AD. It was built as a place of worship for the royal members of the court. A mosque that shines like a pearl in a moonlit night, hence the name Pearl Mosque, Moti Masjid is one of the oldest mosques in the city. The glorious mosque took nearly four years to complete and is built in a style that is typical to Shah Jahan's era of reign.

The masjid stands on the ground that slopes from east to west to the north of Diwan-i-Am complex. The structure contains three huge domes of high architecture value. These three Hindu style domed kiosks have been constructed using white marble and the rest of the exterior building made out of red sandstone.

The mosque has twenty-one bays of which three have vaulted soffits. In t2he center of the court of the mosque, a marble tank is situated and a sundial made on an octagonal marble pillar standing in one corner. The western wall has an inlaid mihrab that is beautifully carved with six niches corresponding to the arches. The main prayer chamber has lattice screens made of marble on either side to separate the portions from the main chamber hall. These portions were used by women to offer their prayers. Above the parapet there are seven chhatris beautifully designed with an octagonal tower along with domed shape marble structures at each corner.

It has three main gates out of which the eastern gate is the grandest entrance, intricately designed. Both the northern and southern gateways consist of ornamental designs and are crowned by three square chhatris. The main gateways are built of red sandstone exterior and marble interior and can be approached by staircase.

It is currently closed for visitors, but can be viewed from the outside.