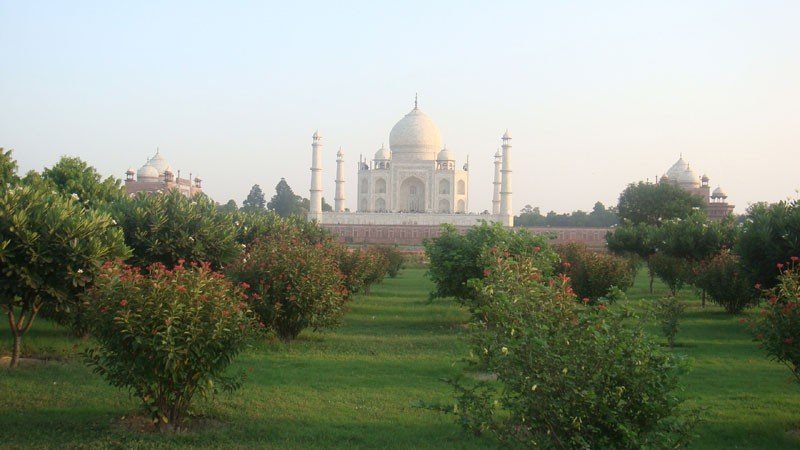 At a distance of 9.5 km from Agra Cantonment Railway Station, Mehtab Bagh is a charbagh complex situated north of the Taj Mahal complex and the Agra Fort on the other side of Yamuna River.

The Mehtab Bagh garden was the last of eleven Mughal-built gardens along the Yamuna River; the first being Ram Bagh. The emperor Shah Jahan noted this crescent-shaped flood plain covered with grass around the Yamuna River and found it a great location to view the Taj Mahal from some distance. He then conceptualized it as a pleasure garden filled with moonlight and name it Mehtab Bagh during 1631 to 1635.

Mehtab Bagh is a 25 acre garden, square in shape, measures about 300 x 300 m and is perfectly aligned with the Taj Mahal on the opposite bank. During the rainy season, the ground becomes partially flooded. The garden has fountains and pools along with several pavilions. Few of the gardens proportions were similar to that of the Taj Mahal. Mehtab Bagh came later in the possession of King of Amber, Raja Man Singh Kacchawa.

Mehtab Bagh also joins two other gardens to the west. Originally, four sandstone towers marked the corners of Mehtab Bagh of which only one at the south east edge remains. The gardens also contain a large pond on its outer edges which reflects the image of the Taj. Apart from water channels that enhance the beauty of the park, there is also a small tank in the center of the garden.

The garden was ruined by frequent floods. Most of the damaged part was taken by villagers to use as building materials. The structures that remained within the garden are not maintained properly. ASI started some restoration in the 1990s. Recent excavations conducted by ASI revealed a huge octagonal tank equipped with 25 fountains on the southern periphery, a small central tank and a pavilion on the east. It is also known as the Moonlight garden as one can enjoy a spectacular night view of Taj Mahal on full moon day from here.