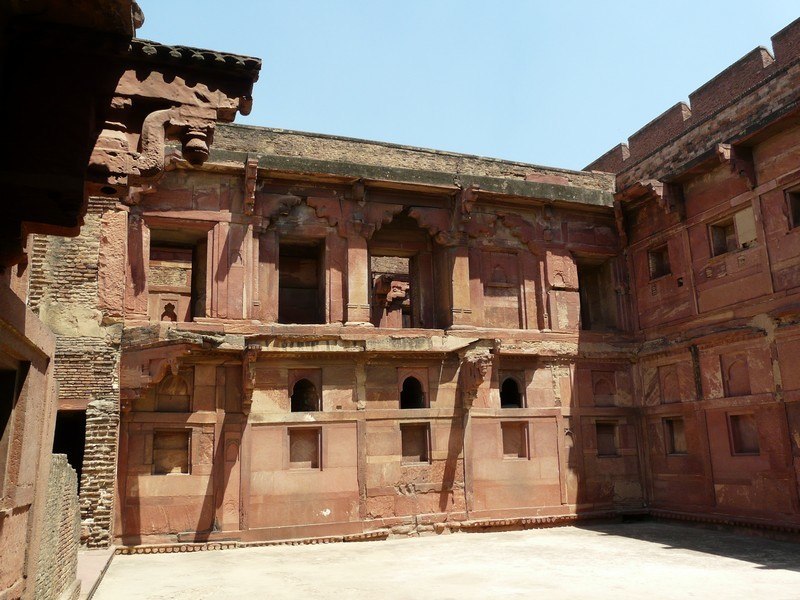 At a distance of 4.5 km from Agra Cantonment Railway Station and 2.5 km from Taj Mahal, Akbari Mahal or Akbar Palace is situated between Jahangiri Mahal and Bengali Burj inside the Agra Fort.

Currently in partial ruined state, the Akbari Mahal is a testimony presenting the gigantic imperial courts that have the spacious chambers. Akbari Palace was once a huge palace complex which was used for residential purposes. Built between 1565-69, it had a large stone paved courtyard enclosed on all sides by suites and chambers. Only the river-side apartments have now survived.

The Palace was designed and constructed in such a manner that whichever entrance the women used to enter the palace they were protected by purdah. The security and Purdah system was well designed in the palace. There was a great Assembly hall with a high ceiling on the lower storey, which can still be seen but the upper storey is completely in ruins. It also had a hall with triple opening on the riverside.

Akbar's Harem was housed in this palace. Historian Abul Fazal recorded that Akbar 'made a large enclosure with fine buildings inside, where he reposes. Though there are more than 5000 women. He was given each a separate apartment'. Chaste women and trustworthy officers were appointed in the service of the Harem. It was carefully guarded. Women were paid monthly salaries ranging from rupees 1028 to 1610 maid-servants were kept in large numbers for cleaning, lighting and other duties of the household. They received salaries from rupees 2 to 51. All this was well organized and kept in perfect order.

The Bengali Burj to its southeast has a spacious square hall with arched aisles. It has a domed ceiling and chevron design grace the nook shafts of the arches. The Akbari Baoli near Burj is actually a well with five rows of rooms around it and steps leading to the water.