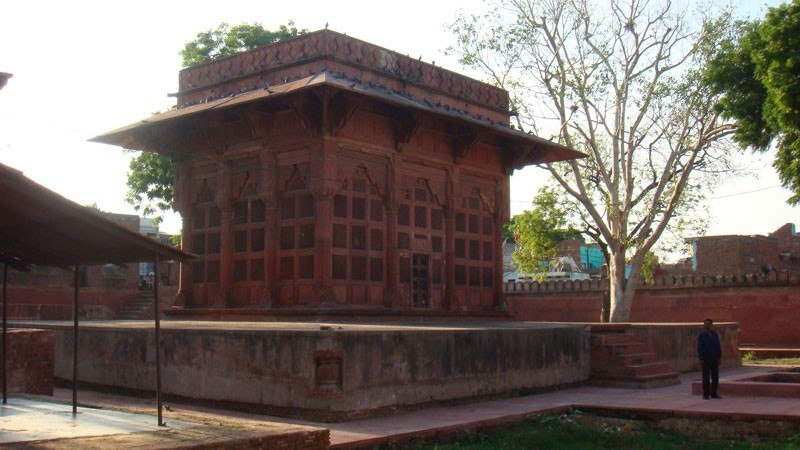 At a distance of 9.5 km from Agra cantonment Railway Station and 4 km from Itimad-ud-Daulah, Jaswant Singh ki Chhatri is situated in Rajwara, Balkeshwar along the banks of river Yamuna in Agra. This is now maintained by Archaeological Survey of India (ASI).

Jaswant ki Chhatri is a domed pillared pavilion shaped cenotaph, which reflects Rajasthani architecture. It was built during 1644-58 AD and is said to be the only monument to have been built by a Hindu king in Agra during the Mughal era. The monument is dedicated to Rani Hada, who was the princess of Bundi in Rajasthan. She married Amar Singh Rathore, who was killed on 25th July, 1644 at Agra Fort. His body was given to widow Hada Rani who committed sati at the spot. Raja Jaswant Singh, younger brother of Amar Singh Rathore built this commemorative Chhatri.

The Chhatri is a unique blend of Mughal & Hindu architecture. The surrounding wall is now in a dilapidated condition. However the monumental screen on the eastern side facing the river has survived. Originally this side had three entrances with staircases descending into the water, a series of arched openings with jalis and two octagonal towers crowned by chhatris. The inverted lotus crowned the main dome. The main tomb of the queen is set in the center of a garden on a raised platform. This is surrounded by a rectangular baradari, the structure with twelve pillars of red sandstone with beautiful jail work. The stone work is similar to that at Agra Fort & is popularly known as Agra Jali.