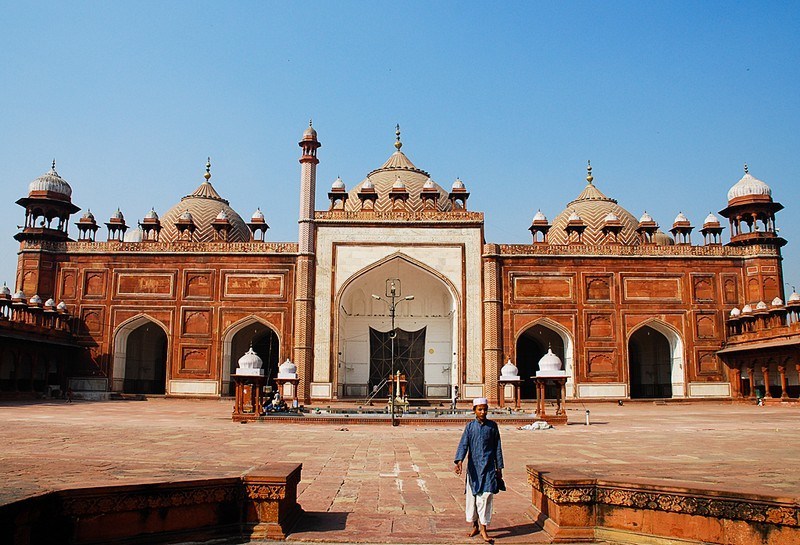 At a distance of 4.5 km from Agra Cantonment Railway Station, Jama Masjid is situated just opposite to the Agra Fort. It is also popularly known as the Jami Masjid or Friday Mosque and is one of the well known Agra tourist places.

Jama Masjid was built by Emperor Shah Jahan for his favorite daughter Jahanara Begum's wish, at the cost of Rs 5 lakhs and took a period of 5 years in construction and was completed in 1649 AD. It is one of the largest mosques in India. The red sandstone structure was built in a typical Mughal style. It rests on a high plinth and is approached by staircase. It consists of a spacious elevated courtyard bordered by arched porticoes to the north and south, with a fountain at its centre. The eastern end was once also bordered by an arched portico and a grand entrance, but those were demolished by the British in 1857 while building the railway line to Agra.

The prayer hall occupies the western end of the courtyard and consists of a long rectangular structure, divided into five sections and crowned by three large domes. All the domes have inverted lotus and kalash finials on the top. Connecting the prayer hall to the courtyard are five archways, of which the central one is framed by a large iwan portico and a white marble facade with Persian calligraphy. Two short slender minarets, decorated in a zigzag pattern, once flanked the central archway, but the right side minaret was destroyed. A series of chhatris line the top of the facade.

The interiors of the western wall have a beautiful mihrab and pulpit in white marble. The Persian inscription in white marble inlaid with black stone on the archway of the central portal is in praise of Jahanara and Shah Jahan. It is said that once surrounded by a market place called Tripolia set in an octagonal (Muthamman) Chowk that was built between the Delhi Gate and the Jama Masjid. But, it was later destroyed in 1871-73 to acquire space for laying down the railway tracks for the city.