Often referred as the Land of Kings, Rajasthan is one of the biggest states in India and is a treasure trove of history and heritage. Formerly known as Rajputana, Rajasthan was divided into various regions, which were ruled by various clans like Meenas, Gurjars, Rajputs and Jats which were responsible for the building of various historical forts in Rajasthan. Scattered all around in the state, these architectural marvels depict the glorious past of various Rajput rulers whose name is written in golden letters in the history. These hill forts are the top Tourist Places in Rajasthan.

Trawell.in presents the most impressive hill forts of Rajasthan here. 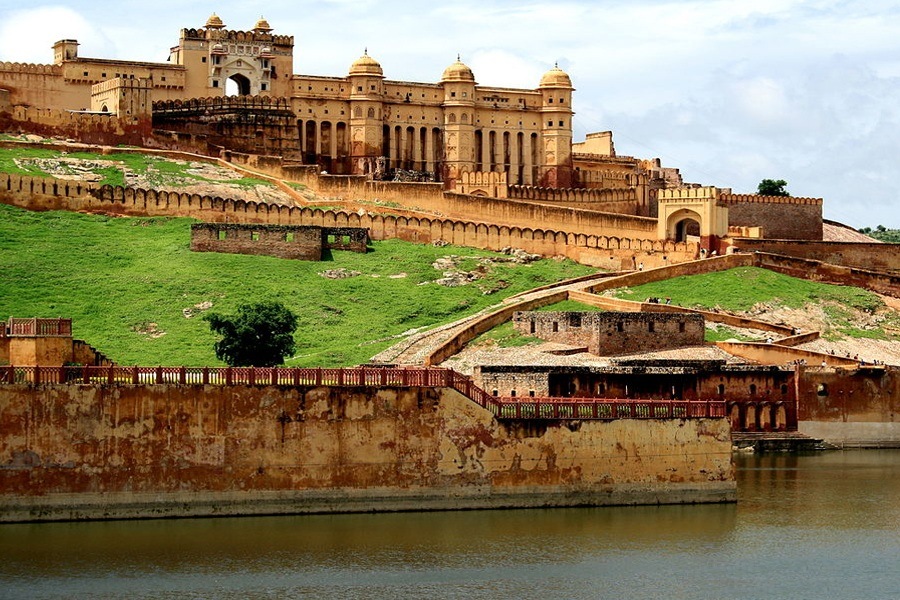 At a distance of 13 km from Jaipur, Amer Fort is one of the most famous forts in Rajasthan and among the most visited Jaipur tourist places. Amer Fort was built in 1592 AD on the remnants of an earlier structure by Maharaja Man Singh of the Kachwaha Rajput clan and was expanded by his successive rulers. Also known as Amber Fort, it was declared as UNESCO World Heritage Site which is a major part of group Hill Forts of Rajasthan. It is also one of the popular tourist attraction to visit as part of Golden Triangle Tour Packages.

Influenced by both Hindu and Muslim architectural styles, Amer Fort was built using red sandstone and overlooks Maota Lake which is the main water source to the fort. The fort is divided into four main sections each with a separate entry gate and a courtyard. Jaleb Chowk, Diwan-e-khas, Diwan-i-Aam, Mughal Gardens, Sukh Niwas and Sheesh Mahal are the prominent structures inside the fort. The fort walls are decked up with paintings and carvings, studded with precious stones.

Reference: Places to visit in Jaipur 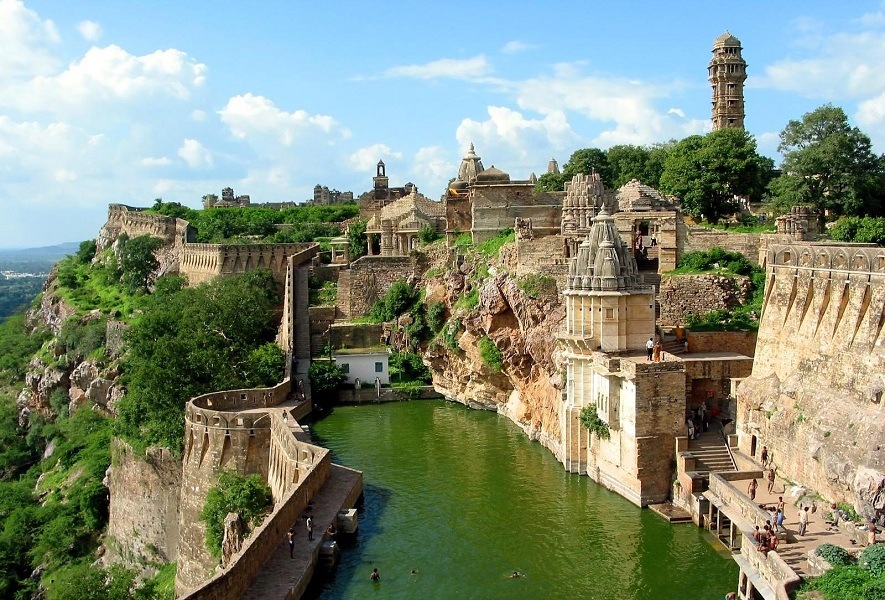 Chittorgarh Fort, the former capital of the Sisodia dynasty of Mewar, is one of the top hill forts in Rajasthan and also among the best places to visit as part of Udaipur Tour. One of the oldest forts in Rajasthan, Chittorgarh holds an important place in Indian history and is brimming with heroic tales of the great Rajput warriors. Often called as Water Fort, the fort stood witness to the invasion of Allauddin Khilji for the love of Rani Padmini of Chittaur. 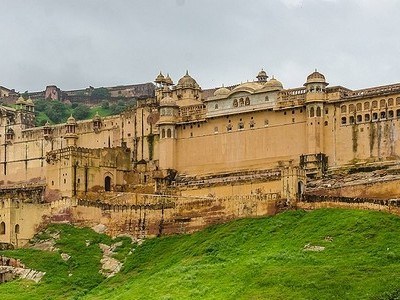 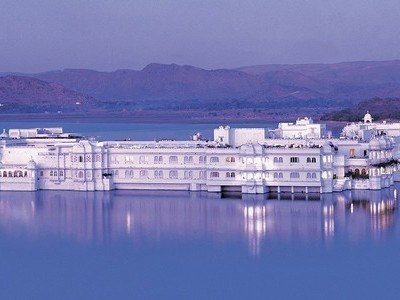 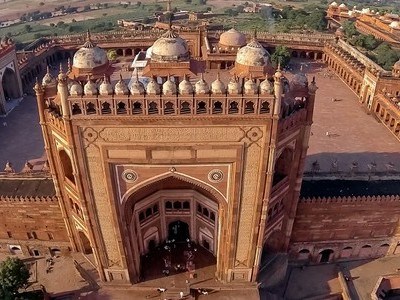 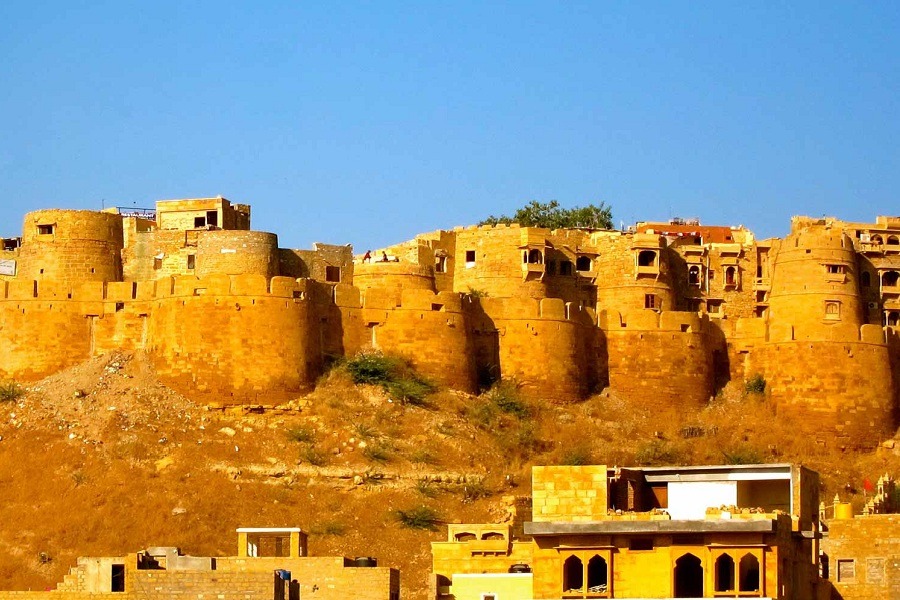 Jaisalmer Fort is one of the largest forts in the world and also one of the must visit Jaisalmer Tourist Places. Built in 12th century by Maharawal Jaisal Singh, the massive fortification overlooking the Jaisalmer city amid the Thar Desert is a World Heritage Site declared by UNESCO under the group of Hill Forts of Rajasthan. Popularly called as Sonar Quila, its massive yellow sandstone walls are a tawny lion color during the day, fading to honey-gold at the sunsets. Jaisalmer is one of the top Places to visit in Rajasthan.

Influenced by Rajput and Islamic styles, Jaisalmer Fort is protected by a 30 feet tall wall surrounding it on all sides which maintain 99 bastions and two major cannon points. The fort also has several beautiful structures including the Royal Palace, four massive gateways, merchant havelis and temples belonging to both the Hindu and Jain religion. Maharawal Palace, Tazia Tower, Jain Temple, Nathmal Ki Haveli, Salim Singh Ki Haveli, and Patwon Ki Haveli are the important structures inside the fort. Within the walls of the forts there are houses, markets, restaurants, and every aspect of a hectic urban town. Jaisalmer Fort is one of the popular attraction not to miss in a Jaisalmer tour packages. 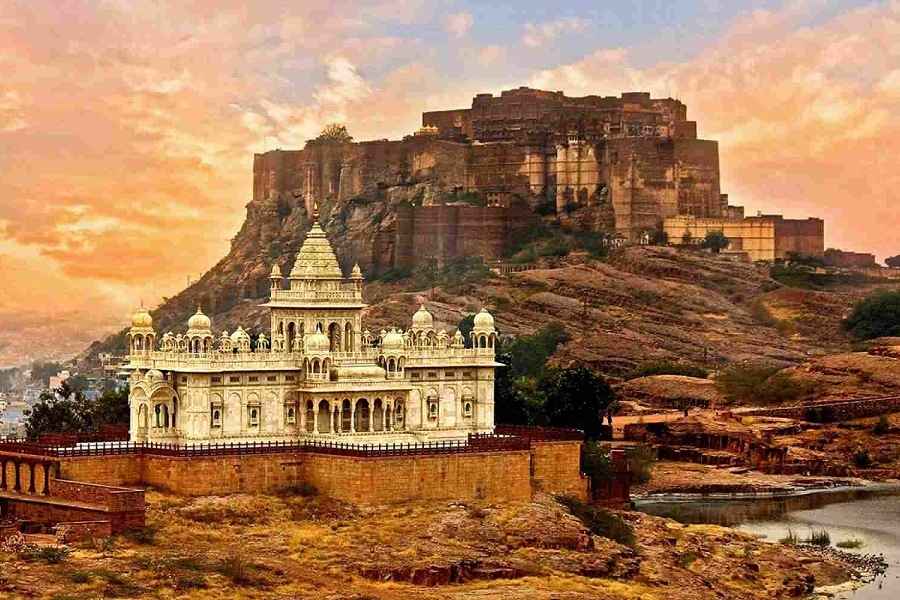 Mehrangarh Fort is an ancient hill fort built by Rao Jodha in 1459 AD when he shifted his capital from Mandore to Jodhpur. Literally meaning ‘Fort of the Sun’, it is one of the largest forts in India and also among the top places to visit in Jodhpur. The fort is treasure trove for its historical monuments, and also offers 360-degree view of Jodhpur.

Enclosed by 120 feet high and 70 feet thick walls, the fort has several palaces which include Moti Mahal, Phool Mahal, Sheesh Mahal, and Daulat Khana. Moti Mahal or Pearl Palace is one of the most prominent palaces of the fort that houses the royal throne of Jodhpur known as the Sringar Chowki. A large part of the Mehrangarh Fort has been converted into a heritage museum, which is one of the finest museums across the country. 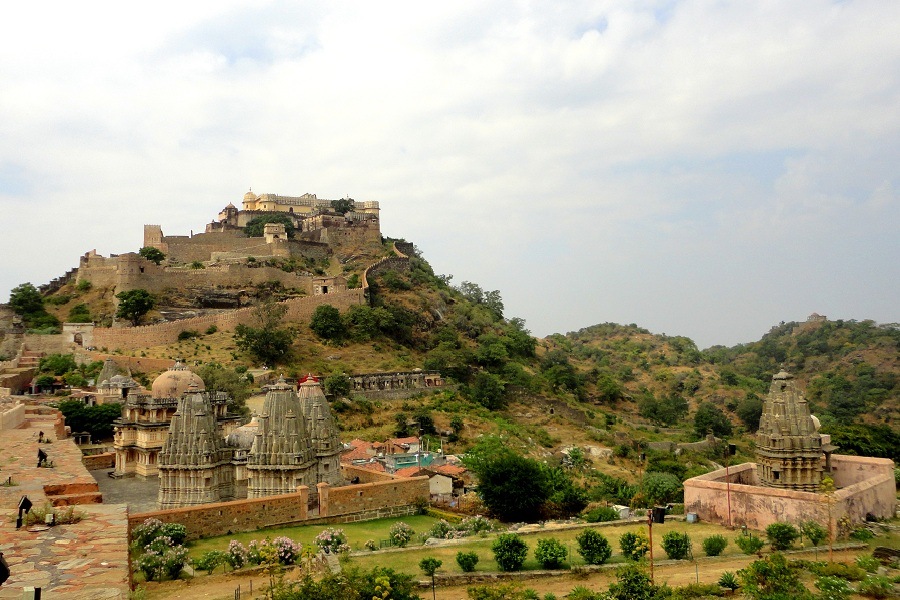 Kumbhalgarh Fort is the second most important fort of Rajasthan after Chittorgarh and also one of the top Tourist Places in Rajasthan. Built in the 15th century AD by Rana Kumbha atop the Aravali Mountains, the height of the fort is almost 1915 m above sea level. Kumbhalgarh Fort is a true specimen of powerful defense architecture as it was seized after repeated attempts and great difficulty. The fortification of the fort goes up to 38 km and is the second largest wall in the world after the Great Wall of China.

Home to massive ramparts and gates, beautiful palaces and temples and well laid gardens, Kumbhalgarh offers incredible views of deep ravines and lavish forests. The Fort is known for its famous palaces like Badal Mahal or Cloud Palace, Palace of Rana Kumbha and Jhalia ka Malia. The fort also contains over 360 temples within its walls. Of these, Ganesh Temple, Vedi Temple, Neelkanth Mahadev Temple, Parsvanatha Temple, Golerao Group of Temples, Mamadeo Temples are the popular temples inside the fort complex.

Reference: Places to visit in Kumbhalgarh 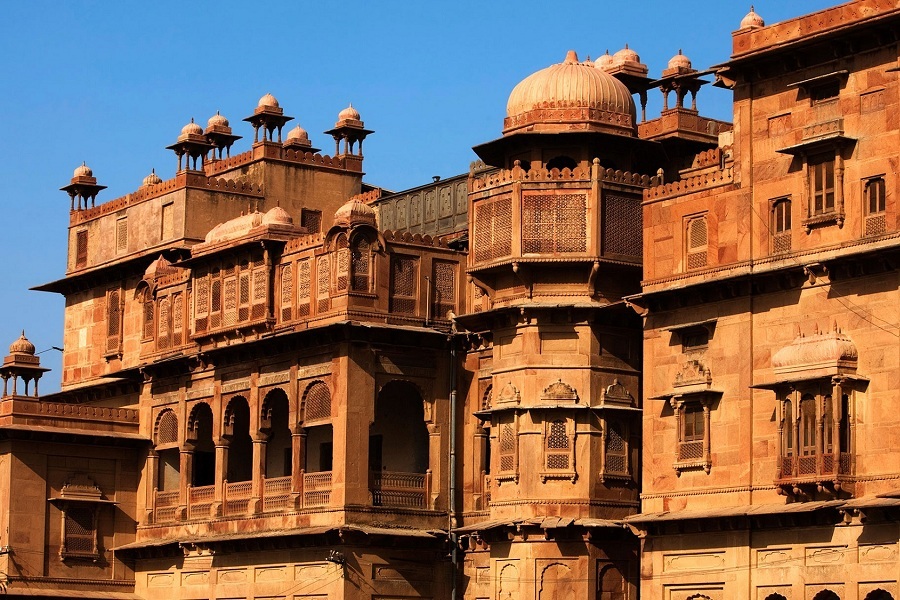 Built by Raja Rai Singh in 1558 AD, Junagarh Fort is one of the few major forts in Rajasthan and also one of the prime Tourist Places in Bikaner. Earlier called as Chintamani, Junagarh Fort is attacked several times but never been conquered. Only Kamaran Mirza, the son of Babur, was able to capture the fort but couldn’t even retain his hold for more than a day.

Famous for its massive structure and architectural designs, the fort is spread over a sprawling area that is bounded by 986 m long wall. The fort comprises 37 bastions, a moat and two entrances, the Suraj Pol and the Karan Pol. Built with red sandstone, the fort has a number of palaces, courtyards, windows which are worth praising for their marble and stone carvings. Anup Mahal, Hawa Mahal, Chandra Mahal, Phool Mahal, Badal Mahal, Diwan-e-Khas, Dungar Mahal, Ganga Mahal and Rang Mahal are the prominent attractions of Junagarh. 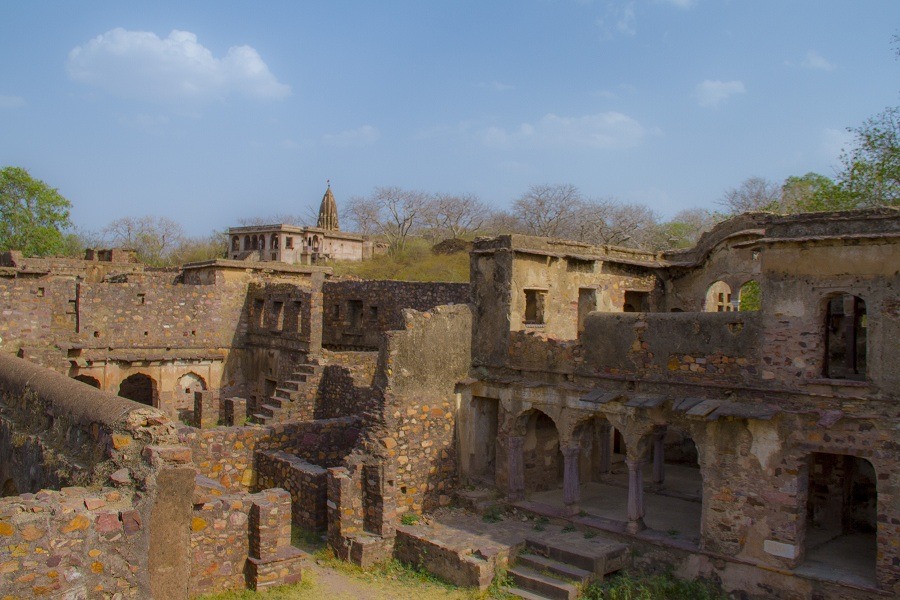 Located atop 700 feet high hill, the Ranthambore Fort spreads across vast area of around 7 km in circumference and possesses beautiful architecture. The Ranthambore Fort is surrounded by massive stonewalls which are strengthened by towers and bastions. Hammir’s Court, Battis Khambha Chhatri, Hammir Palace, Rani Palace, Trinetra Ganesha Temple, Shiva Temple, Ramlalji Temple and temple of Lord Sumatinath and Lord Sambhavanath are the major attractions inside the fort complex.

Overlooking the city of Bundi, Taragarh Fort, stands tall on a steep hillside, is one of the most impressive structures of the city of Bundi and also one of the stunning forts of Rajasthan. Also known as Star Fort, the fort was built in the year 1354 CE and it remains as glorious remnants of the Chauhan dynasty.

Built in typical Rajput style, the fort is well-known for the elephant motifs done on the walls and beautiful stone carvings on the roofs and pavilions. The fort has 3 gateways namely Lakshmi Pol, Gagudi Ki Phatak and Phuta Darwaza, which are mostly in ruins today. The fort also houses an excellent network of tunnels crisscrossing the entire hill side which were saviors in times of need. Bundi Palace, Shikar Burj, Jait Sagar, Step wells, Phool Sagar, Dugari Fort and Ramgarh are the popular places to visit in Bundi.

13 thoughts on “8 Largest Forts in Rajasthan You Must Visit”