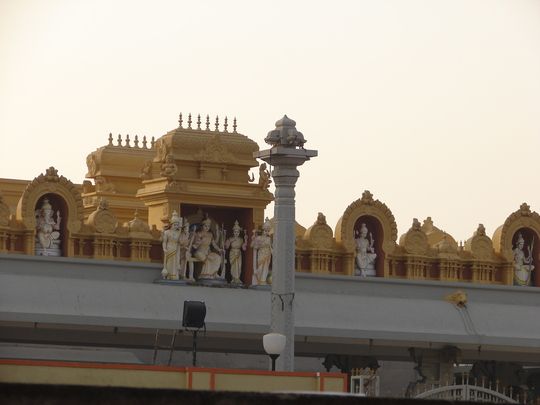 At a distance of 8.5 Kms from Bangalore City Railway Station, Sri Banashankari Temple is situated on Kanakapura Road. Dedicated to Banashankari Amma, an incarnation of Goddess Parvati, this temple is one of the oldest and most famous temples in Bangalore.

The temple was constructed by Subramanya Shetty in 1915. Most noteworthy feature of the temple is that the deity is worshipped in Rahukala, an inauspicious time according to Hindu belief. The temple is open to public everyday but special puja is performed on Tuesday, Friday and Sunday. A popular belief among the devotees is that by worshipping goddess Banashankari Amma in Rahukala, all the hardships and poverty will be removed. The deity is worshipped by lighting multiple oil lamps in half cut lemon peels with the pulp removed.

The temple celebrates three cultural ceremonies in a year - Sep 13th the birthday of Banashankari Amma, Dussehra Festival in October and the temple anniversary in Dec.